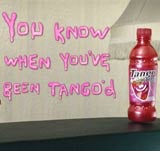 Soft drink Tango is learning to grow older gracefully with its latest line extension. Brand owner Britvic Soft Drinks is understood to be launching a variant called Tango Clear, which is aimed at older teenagers rather than the “tweenies” (nine- to 12-year-olds) who have made up the bedrock of Tango drinkers.

Britvic has yet to comment, but observers say Tango Clear will be in the shops by May, with packaging that will appeal to an older age group. Some believe Tango is moving its sights up the age scale because mothers are monitoring the sugar content of soft drinks consumed by their children as a result of health concerns and the obesity debate. By launching a product aimed at an older age group, Tango can tap into a market where people make their own decisions.

GlaxoSmithKline is also believed to be looking at shifting the marketing focus for its Ribena brand away from mothers to teenagers. The company is thought to want to push its single-serving, ready-to-drink Ribena offerings rather than the traditional dilutable drinks.

Others see these strategies as a simple case of market segmentation, claiming that Tango has saturated its core younger market and is looking to expand its appeal. Perhaps the tactic is to encourage those who drank these brands as children to continue buying as they get older. It is another example of brands looking to exploit the lifetime value of their consumers.

As Peter Shaw, a director at brand consultancy Corporate Edge, says: “If a brand has got fantastic penetration, how does it build on this? It might be easier to broaden the franchise rather than sell it to more people.”

When growth reaches a plateau, brands seek out new targets. He points to Pot Noodle, which he says is hemmed in by its target market of older teenagers and men in their early-20s. It has tried to extend this appeal with the launch of Posh Noodle, aimed at slightly older twentysomething men, but has had limited success. “It is not easy for Pot Noodle, because this age group is looking for different formats,” says Shaw. A Unilever source says: “There are different parameters for measuring success. It is not as big as the main brand.”

Another brand that has tried moving up the age scale is Walkers, which launched Sensations in 2002, aimed more at adult consumers than the children targeted by its core brand. In truth, Walkers has such a large market share that it has become the generic crisp brand. It has targeted children over the years and needs to find a way to extend its appeal and tap into the premium adult market.

For snack brands aimed at children such as Tango, the outcome of the obesity debate is going to radically alter the marketing landscape.

It looks likely that pressure from the Government will lead to a “traffic light system” being introduced on packaging, with a red light indicating fatty, salty or sugary foods, to be eaten sparingly. An amber light would mean fatty but nutritious food, to be eaten in moderation. A green light is for fruit and vegetables, which can be eaten often. It is thought this will also be extended to soft drinks.

With the prospect of red-light products banned from television advertising before the watershed at 9pm to avoid targeting children, the effects could be severe.

These moves are likely to be introduced in 2007, the deadline given to the industry to come up with effective self-regulation or face legislation.

One source thinks that many children’s brands may start shifting their targeting to older age groups which respond to ads shown later at night. But he believes that many children with televisions in their bedrooms watch long after 9pm, and there could be a new breed of TV ads for children’s products aimed at them.

Starved of the oxygen of publicity, brands will find it difficult to launch extensions and innovation could suffer in the same way as it has in the cigarette industry following the advertising ban. This could lead to brand owners hurriedly rolling out extensions and new brands before the clampdown is introduced. They will also try to ensure that new products get an amber rating, though there are no guidelines on where the line will be drawn over the ratings.

“I don’t think they have got that far yet, because none of these things is going to happen for two years and no one knows where the barriers will be,” says a source.

Last week, Nestlé Rowntree announced that it was repackaging its Smarties brand, axing its iconic tube and replacing it with a six-sided “hexatube” box. This may be in preparation for the advertising ban, after which packaging and design will assume greater importance in marketing products.

Most observers think the launch of Tango Clear is unrelated to the coming ad restrictions, but if the product is still around in two years, it could help Britvic find a way round the pre-watershed ad ban. Launching a sub-brand for older teenagers is an idea that other snack brands aimed at children may have to seriously consider.