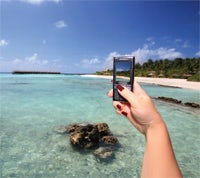 Having used print and TV campaigns to capture the imagination of consumers, brands from the travel sector are turning their attention to smartphones and other mobile devices to engage with consumers both when they research and book trips, and when they take their break.

Brands are starting to make the most of the holiday market through the use of apps or by encouraging people to stay in touch via social media when they are away, according to the research.

Not surprisingly, the study by agency Total Media – which spoke to 1,375 people in the UK via the Lightspeed online research panel – reveals that taking photos, texting and making phone calls are the most common uses of a mobile when on holiday. However, only about 8% of people update their Facebook profiles and 4% use Twitter while away.

People are more interested in practical information when on holiday, argues Nick Oram, joint managing director at Total Media. “People are not interested in checking their Twitter feed or updating their Facebook status while on holiday. They want structured and specific information relevant to the task at hand.”

At the moment, only 6% of mobile owners are using their handset to check reviews of places they want to visit while on holiday. However, 15% of 16- to 24-year-olds and 13% of 25- to 34-year-olds say they would use a mobile service that provides reviews from the locals in future.

“The ability to access local relevant information in real-time wherever they are in the world is far more exciting for the industry, and interesting for consumers,” says Oram.

He adds that roaming charges are likely to be to blame for the discrepancy in what people do at the moment and what they want to be able to do. “People are scared of being clobbered with an almighty bill. I know a lot of people who have been caught out, which probably stops many mobile owners using all the fun stuff available.”

So while there are augmented reality apps such as Layar, which provides real-time digital information about a tourist attraction, restaurant or place when the camera and geo-location services on a phone are used, these services are used much less because of their potential cost.

Oram says marketers should focus on apps that can be downloaded before going on holiday, such as guidebooks, because the research indicates that people are prepared to pay for these. For example, almost a third of under 34-year-olds, 34% of 35- to 44-year-olds and 42% of those over 45 are happy to pay for a downloadable guidebook.

Mobile apps could also help brands manage their customer relationships. “If someone visits your website you may have had to pay for that to happen [via paid search, for example]. But if you have given them something of value in the form of an app, then you can use CRM even before they have made a purchase. That is an opportunity to convert them into a customer,” says Oram.

And while downloading apps in advance gets around the issue of roaming charges, mobile owners do still access the internet online while away, according to some brands. For example, social and location-based service Facebook Places allows people to “check in” to a tourist attraction and write a comment about it, something that VisitBritain is using to encourage overseas visitors to talk about tourist sites in the UK (see Frontline, below).

But according to the research, only 8% of 16- to 24-year-olds and 7% of 25- to 34-year-olds are keen to use a social media service that allows them to connect with fellow travellers (see table). This ranks below translation apps, using a mobile to pay in shops and checking flight times.

But while most of the things people want to be able to do are practical, only just over 5% on average across all age groups say they would want to see maps and direction tools on their phone, compared with 10% who are keen to check flight times via mobile internet.

Being able to translate a sign into English was the single most popular function for an app, with 32% of 16- to 24-year-olds, and 24% of 25- to 34-year-olds saying they would use this service. “It is the ability of applications to deliver one small, very well-defined function that makes them so popular with consumers,” says Oram.

And even for the smallest brands, this can mean opening up new channels of communication with customers, he adds. “You can sell the app in the first place and then you have got that direct line of communication that didn’t exist before.”

People are increasingly using mobile apps and mobile websites to plan and book travel. We see this from our own research too, with lots of travel brands reporting three-fold annual increases and above over the past few months.

This means that the comfortable days of designing websites for a single-size browser are over. Brands that are not available across a range of devices will lose out.

We’ve created apps, such as Topsee, showing photographs and reviews of the top things to do in central London from local writers and bloggers, which people can download before they leave home to avoid data roaming charges. We also have Fonefood, allowing people to book a restaurant and get one of the deals we source for our website.

We’re seeing an increasing percentage of our regular web sales move to mobile, but perhaps more interesting are the new behaviours we’re seeing. For instance, our mobile restaurant booking service sees a big peak of use between 11pm and 2am – we can only assume these are customers in need of something to eat after a drink or two.

There has been a lot of talk about mobile and how Facebook will develop it for its 500 million users. This fits in with how people use mobiles abroad because once it becomes truly social there will be a huge opportunity for all sorts of games and services.

I would expect people to update their Facebook status telling their friends how they are having a great time on holiday. Facebook Places shows tips put in by friends, allowing people to have a better holiday experience, so I was a bit surprised about the low figures for people updating Facebook.

I think there is great potential for apps that enhance the holiday experience. The uncharted territory is trying to find the business model for apps – it is much more likely that you could develop an app for your product that is a useful tool for retention, so it could be that you find a way to advertise relevant offers within those applications.

The cost of data abroad is still astronomical and that is possibly the biggest barrier. Until the networks start providing really competitive data offers, people are going to be incredibly wary.

Mobile networks are in danger of missing out, especially when wireless technology is more prevalent, such as when people go into a McDonald’s anywhere in the world and get on a free wireless network.

We don’t have a mobile platform for Habbo but we are doing a lot of work to try and understand what the user experience is like on mobile.

We launched our app that allows people to check train times a year ago, and take-up massively exceeded our expectations. We have had more than 900,000 downloads. We recently introduced purchasing and it is performing well. The next step will be a barcode arriving on the phone that is the ticket itself.

It was very interesting to read the research findings to see what people want from their mobiles while travelling. We see our app as a bit of a hub for people’s travel arrangements, so we’ve got links to taxi phone numbers and maps, and later this year people will be able to pay for car parking through the app. We also expect to enhance the taxi proposition to allow booking.

We are interested in this research because of the “what next” element. Our app has two distinct uses – when someone is dashing for a train and wants to check whether they can make it, and when they are on the train with half an hour to kill and want to know what they can do at their destination.

I also expect there will be some killer apps that emerge that become the de facto for use on holiday.

Pre-booking and redemptions of coupons are moving towards mobile platforms, but I think there is still a large element of the inspirational aspect that will still come via desktops.

But I’m slightly surprised that the use of maps on mobiles while on holiday abroad is low. We are moving more towards the all-pervasive nature of mobiles in people’s lives – you can see that by the 20% of people checking sports results on their mobiles.

Rather than trying to create our own platforms or apps, we want to tap into the information that is already out there and what people are already using on their mobiles. We have created an online league table of popular places created by tourists, based on check-ins via Facebook Places [on their mobile devices].