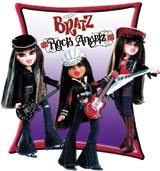 The hugely successful girls doll brand Bratz is to be extended into a fashion clothing line for young girls.

The range, to include T-shirts and jackets, will be based on the dolls’ outfits and is aimed at girls aged eight to 12. MGA Entertainment, the US company behind the brand, has teamed up with Resilience LLC to launch the range, called Bratz Couture.

“For nearly five years, Bratz has been setting new trends in the fashion doll world, and the forthcoming Bratz-branded Couture line will change the ‘tween’ fashion business as it did the fashion doll business,” says MGA Entertainment chief executive Isaac Larian.

The clothes range will be rolled out in the US in July and is expected to cross the Atlantic later this year.

Vivid Imaginations manages the Bratz brand in the UK, and this week it announced a record UK market share. According to NPD Retail Audit UK, Bratz outsells its nearest rival Barbie by two to one, with a 63.4% market share. The Bratz brand has also recorded a year-on-year increase of 44% and established itself as the number one UK toy brand.

Vivid Imaginations licensing and marketing director Emma Sherski says/ “The brand is a mere four years old, yet has blown away its nearest competitor and is now outselling it two to one. This is the business equivalent of a new soft drink wiping Coca-Cola off the market – almost inconceivable, yet it has happened.”