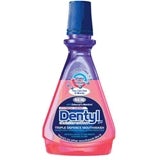 Bray Leino, the Devon-based advertising agency, has won the Dentyl pH account following the brand’s acquisition by US lipcare specialist Blistex. It is understood to be worth several million pounds.

Blistex, which acquired Fresh Breath, the company that owns Dentyl, for an undisclosed sum last week, handed Bray Leino the account without a pitch.

The agency will handle both advertising and media planning and buying for the brand, previously handled by Squiggle and Total Media North respectively.

The first project for the agency is the launch of a new product in the Dentyl pH mouthwash range, currently being rolled out in Boots and Superdrug.

Dentyl pH Exhilaration will be positioned as a premium product and will be available in two variants, Icy-fresh Cherry and Icy-fresh Mint. The Fresh Breath Company was founded in 1997 by dentist Phil Stemmer, inventor Mel Rosenberg and accountant Michael Storfer. Its most successful product, Dentyl pH mouthwash, contains two brightly coloured components in a clear plastic bottle that are activated by shaking. The product claims to attract, lift and absorb plaque.

Blistex says it wants to turn Dentyl into an “international brand” and claims that since its launch it has established an 18% share of the UK’s £82m mouthwash market, ranking it second behind Pfizer’s Listerine.