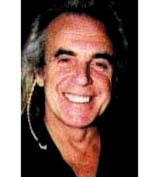 Thank god for ageing celebrities. The Diary was starting to feel positively geriatric last week, mingling with the beautiful people at the Bacardi London Bar and Club Awards, when who should hove into view but the reliably ludicrous Peter Stringfellow.

Looking nearly as old as his hairstyle, the veteran club owner had still managed to surround himself with a bevy of nubile blondes, some of whom were definitely not a day out of sixth-form college.

Just to complete the “land of the dinosaurs” effect, “Stringy”, as he probably isn’t known in clubbing circles, was followed into the Hilton’s ballroom by Boy, or should that be Old Boy, George, wearing a preposterous blue hat (to cover a bald spot perchance?) and Chris Quentin.

Yes, that’s right, Chris Quentin, “Our Brian” from Coronation Street circa 1980, who looked, the Diary has to admit, annoyingly young. You can’t win them all.