The sandwich business is anything but stale for the owners of Pret A Manger. It emerged last week that plans for a flotation could be shelved after unsolicited approaches from private equity firms. The sandwich chain, which is majority owned by its founders, Julian Metcalfe and Sinclair Beecham, was on course to list its shares this autumn at a value of between £300m and £350m. But a potential bidding war between the reportedly interested Lion Capital, Bridgepoint and PPM could provide an even bigger windfall for Metcalfe, Beecham and the other shareholders, with a figure of £400m being mooted.

Pret A Manger commercial director Simon Hargraves says: “Pret is moving towards an IPO [initial public offering] in order to finance a large US expansion. We employed Rothschild Bank to see us through that process and there has been great interest in the brand. At this stage nothing has been ruled out.”

The Pret A Manger business began in 1986 when, at the age of 23, Metcalfe and university friend Beecham borrowed £17,000 from a bank and opened the first outlet in Victoria Street, London. At first, Metcalfe did all the cooking himself and by 1992 the pair had opened three more shops with a formula of freshly made, organic sandwiches that clicked with consumers. Today there are over 160 branches in the UK (mainly in London) and the 13th New York shop opened this month. There are also branches in Hong Kong and Singapore. The company posted profits of £23m for the year ending January 2007.

Interbrand executive director Graham Hales says: “Pret created a category. It added a quality and a level of more considered consumption which brands before it hadn’t really had. Pret changed the market dramatically and showed other brands how it should be done.”

The last time there was speculation about Pret floating was in 2001 but it sold a one-third stake to McDonald’s for £50m instead. Metcalfe and Beecham planned to expand into the US and said they wanted to learn from McDonald’s international infrastructure. McDonald’s was keen to carve itself a slice of the ethical pie that Pret embodied and despite accusations that Pret was selling out, Metcalfe remained in charge of the destiny of the food and his staff. Yet Pret has been very careful to distance the brand from its McDonald’s connection to ensure its ethical image remains intact.

The sandwich market in Britain last year was worth an estimated £2.9bn, with Pret holding a 1.3% share. However, British Sandwich Association director Jim Winship says the true value of the total market is closer to £4bn. “It is increasingly difficult to define the differing markets. In many ways, Pret set the standard for other brands to follow and, to some degree, many have caught up. It is a highly competitive market, particularly with the coffee bar sector having a great deal more activity recently. The increasing competition is one of Pret’s greatest challenges. That, and in such a tough market, it is perhaps not so easy to innovate.”

The company first moved overseas in 2001 with outlets in New York and Japan, but the Pret brand has had problems translating to foreign markets. The branches in Japan closed after the franchisee expanded too quickly. Plans to open 40 shops in the US by the end of 2004 had to be pared back after Pret was forced to close six of the 16 sites it had opened in its first year in New York.

Hargraves admits Pret has had “a few issues” in the US. He says: “We have really had to tailor things to the US market. Although the shops are instantly recognisable as Prets, we have had to alter our offering, especially the coffee. Another difference is in the US definition of and standards for organic. It’s those sorts of sensitivities that will either make or break a brand.”

Back at home, however the company appears on course with a sustained phase of expansion at home, opening 45 outlets in two years. It is also launching a new concept later this year with the first ‘Pret Pod”, a kiosk-style satellite branch in busy locations such as stations and airports. The Pret Pods will use kitchens at nearby branches to prepare their stock. Some observers say Pret is coming to this extremely competitive sector of the market rather late but that its strong brand image should allow it to grab a share.

The company maintains its brand identity with a marketing budget that amounts to just 0.4% of total sales. There are only three members of the marketing department and the approach consists of framed posters in the shop windows, chatty copywriting on the packaging and a brochure, produced last year, encapsulating the brand’s values.

Experts say Pret that owes much of its sustained success to an ability to keep the offering up to date – and that, crucially, the consumer has complete confidence in the quality and sourcing of its ingredients. Hargraves says: “We don’t do advertising, we have no press office. We sell sandwiches and we try to keep it as simple as that.” 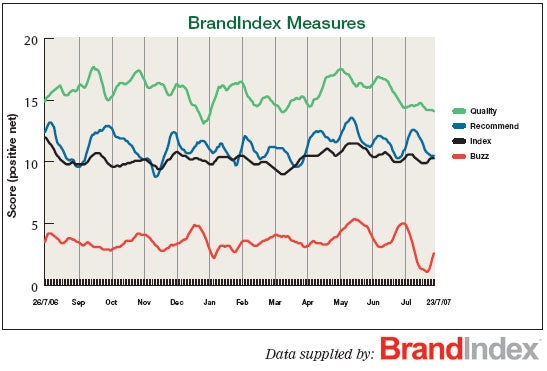