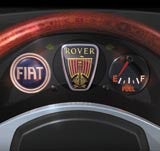 Beleaguered British car manufacturer MG Rover is parked outside the last-chance saloon. It is waiting to see whether a &£1bn joint venture deal with China’s largest vehicle producer, which would give the state-owned Shanghai Automotive Industry Corporation (SAIC) effective control of the ailing Rover marque, gets the final seal of approval from various regulatory bodies in the country.

The deal is a lifeline MG Rover may not be able to survive without. And the Government is so anxious to avoid headlines about 6,000 job cuts at Rover’s Longbridge plant in the run-up to a General Election that Chancellor Gordon Brown is to use a trip to China later this month to express his support for the deal.

But the tie-up is far from certain and many in the car industry predict it will be little more than a stay of execution. The MG Rover brand, like its sales figures, is in decline, and it is likely to take more than a cheque, however sizeable, to solve its problems.

Rover is not alone in its struggle for survival. Fiat Auto, once the darling of Italian industry, is reportedly losing &£500m a year. The Turin-based company, whose Fiat, Lancia and Alfa Romeo marques used to supply 80 per cent of the cars bought in Italy, has seen its market share there fall to a low of 27 per cent.

The Fiat group is involved in a high-profile dispute with the world’s largest car manufacturer, General Motors (GM) over the ownership of the loss-making automotive division and the terms of a deal struck in 2000 that could force the US giant to buy the business.

The outcomes of these two sets of negotiations will have huge implications for the car industry. The landscape of the sector is sure to change and there is a very real possibility that one, if not both, of the once-dominant marques might not be around for much longer.

The problem at Rover is that the company does not have the money to replace its range of tired and outdated models and its sales are falling fast. According to the latest figures from the Society of Motor Manufacturers and Traders (SMMT), sales were down 47 per cent in December compared with the same month in 2003. Overall UK sales for 2004 were down almost 24 per cent on 2003, to 44,779 new cars, giving MG Rover a market share of less than two per cent.

Rover insists the SAIC deal is not a takeover because there will be no change to its share structure. Instead, the companies will form a joint venture company to design and produce cars for both the European and Chinese markets. But SAIC will own 70 per cent of the joint venture and get access to Western technologies and European markets. Under the deal, Rover-branded cars could end up being sold in China.

Negotiations are sensitive. When Rover chairman John Towers, part of the so-called Phoenix Four group of businessmen who bought Rover from BMW in 2000, said in November that the deal was imminent, this caused resentment in China with SAIC dismissing the comments as “premature”.

Reaching for the tow-rope

However, Rover is adamant that a Chinese partnership is on the cards. Communications director Daniel Ward says: “Both companies are working as if everything has been signed. The deal will mean a sustainable future for Longbridge and will provide funding for new models.”

Ward believes China is the one really significant growth market in the world, saying the US and Europe have become saturated. He adds that work is already taking place on a new medium-sized car and the partnership is a confidence boost for Rover.

But not everyone shares this optimism. One industry source says: “Rover is totally screwed whatever happens. You’ve got to remember why BMW sold it in the first place. It didn’t see a future and it was right. It should be allowed to die gracefully with whatever dignity remains.”

SAIC’s ambition is to be one of the top six vehicle producers in the world by 2010. Last year, it bought almost 50 per cent of South Korea’s fourth-largest car manufacturer, SsangYong Motor, and it has also been exploring potential tie-ups in eastern Europe.

But the delay in announcing its Rover partnership is becoming a cause for concern. Time is not on Rover’s side and all other options appear to have been exhausted. The company entered into talks with Malaysia’s Proton in 2001 and there were rumours of a deal with car and truck producer China Brilliance. But negotiations stalled and with the &£425m interest-free loan that BMW left Rover in 2000 drying up fast, even Rover’s own auditors have begun to stress the importance of the SAIC deal.

Towers admitted recently: “The future of the company rests on this deal. It is absolutely critical.”

Paul Nieuwenhuis, assistant director at the Centre for Automotive Industry Research at Cardiff University Business School believes the deal has to go through soon, as Rover is struggling to keep up with rivals that have brought out a new generation of cars since Rover launched its 25 and 45 models.

“Some companies have a very strong survival instinct and will always keep going in some form. Rover seems to be one of those,” he says. “But there is a time limit on all this. Rover can’t hang on forever. Volumes are going down and losses are going up.”

But one advertising executive feels Rover is fighting a losing battle. “People don’t have any rational or emotional reasons to buy a Rover,” he says. “Rover’s desirability rating is zero. I wouldn’t blame an ad agency if it didn’t turn the brand around. If you haven’t got the raw material to work with it’s very difficult.”

Chris Wood, chairman of branding agency Corporate Edge, has worked with Triumph, Vauxhall and Ford in the past. He believes a collapse in nationalistic brand loyalty has contributed to Rover’s woes. He claims he cannot see a branding or product argument for Rover’s existence, giving SAIC all the aces.

“If I were SAIC, I would wait until Rover was on its knees,” says Wood. “I think SAIC will string it out right to the end and do a deal on very favourable terms.”

SAIC officials said this week they were confident of securing a joint venture deal before the General Election in May, but it has been rumoured that the company might also be talking to Fiat. Rover is offering SAIC access to the technology it needs to become a world player, but if Fiat were to make a similar proposal the British deal could be dead in the water.

The origin of Fiat’s spat with GM dates back to 2000, when there was a race between GM and DaimlerChrysler to ally with Fiat. The German company was hoping to buy Fiat outright, but Gianni Agnelli, the patriarch of the family-dominated group, wanted to keep control and favoured GM’s offer to buy a 20 per cent stake. The deal also gave Fiat the right to sell GM the remainder of its car division, a clause known as a “put” option.

GM has its own problems and does not want additional production capacity in Europe. It claims the deal has been invalidated by Fiat’s decision to sell off its finance arm and to halve GM’s stake to ten per cent.

But a Fiat spokesman says: “We refute that. The ‘put’ is valid and it’s exercisable. If GM does not want the ‘put’ in the contract any more there is a value to that clause.”

Investors had been expecting GM to pay about &£1bn to extricate itself from the agreement, but the two sides have still not reached a settlement.

Fiat failed to find a friend

One of Fiat’s major problems has been its failure to build an international alliance, in the way that Renault and Nissan and Daimler (which owned Mercedes-Benz) and Chrysler have done. Nieuwenhuis says: “Fiat operates in a Turin myopia. It’s not a truly global organisation.”

Former Toyota GB commercial director Mike Moran, who is now a managing partner of the Orchard Consultancy, says Fiat still has a good reputation for making appealing small cars, but that its advertising is weak.

He adds: “Fiat’s overall marketing communications need an overhaul. I don’t see any Fiat advertising I think is any good.”

One option for GM would be to shut down Fiat Auto if it were forced to go through with the deal. But Moran says: “The Fiat situation has a political dimension. One can’t imagine the Italian government letting it go under.”

There is no question that Fiat Auto is in serious trouble and the longer the situation with GM remains unresolved the harder it becomes to turn things around. But at least, unlike Rover, Fiat has a host of new models lined up, many of which are already impressing the critics. The company says it plans to break even by next year and Nieuwenhuis adds: “A few years ago, Fiat seemed to have lost the will to live but that appears to have gone away. It has a new vitality.”

MG Rover and Fiat Auto are learning fast that no company has a right to exist. The money Fiat is expected to receive from GM could be the catalyst the Italians need to turn things around. It seems increasingly unlikely that Italy will be mourning the loss of its beloved marque just yet. But the same cannot necessarily be said of the UK and Rover.