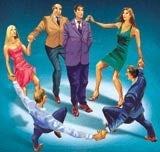 Patrick Thomas’s recent departure from Scottish drinks company William Grant &amp; Sons demonstrates the problems that can occur when an outsider is brought in to manage a family business. But do the benefits of moving into such a close-knit environment make the risks worthwhile? asks David Benady

It is never easy trying to fit in with someone else’s family. When the family in question happens to run a powerful business requiring the services of an outside manager or marketer, the executive concerned could be in for a very bumpy ride.

However, this may depend on the family and the business. There are many marketers who believe that joining a family firm is more rewarding than working for a publicly owned company, and it is not just the prospect of marrying into a wealthy dynasty that attracts them. Some Mars executives insist that the family-owned structure of the business makes for a more interesting career than what is offered by publicly quoted rivals.

One of the great advantages of family ownership is that brands are looked after in a way that stock market-listed companies, with their short-term perspective, cannot match. But the question facing the brand-owning family firms is whether they can cope with the wave of consolidation sweeping over all sectors of industry, along with the parallel move to superbrands with worldwide distribution.

This is partly what inspired William Grant &amp; Sons, founded by the eponymous Grant and his seven sons in 1886, to hire the first outside marketer in the company’s history in 2000. With a turnover of &£400m and profits of &£30m, it was not financial crisis that led them to appoint Frenchman Patrick Thomas, a veteran of Pernod Ricard where he worked alongside Patrick Ricard, as group managing director.

However, consolidation of the drinks industry has created a number of giants with global marketing reach and huge financial power. Sandy Grant Gordon, the former chairman, said there was a need to bring in “the best professional management available”. But recently, Thomas left the company after what has been reported as a disagreement over a decision by the family to wipe out a layer of management, a move he disagreed with. The company said only: “We have decided to switch from a two-tier board structure to a single-tier board structure.”

His departure may hint at the challenges facing executives brought into close-knit family businesses. Families may have very strong views of the way things should be done, and have a tendency to override outsiders who beg to differ.

Blood is thicker than lager

Nick Holmes, who has worked for both Heineken, controlled by the Heineken dynasty, and in particular the late Freddie Heineken, and Interbrew, majority-owned by the de Spoelberch, Van Damme and de Mevius families, says it can be refreshing that the families have respect for the integrity of the brands and long-term interests of the companies.

But it can also preclude taking part in new developments. “There were things about Heineken that were untouchable because of Freddie’s direct influence on the business. In the US, the idea of marketing a Heineken Light was unthinkable when he was alive because he had a strong belief it should be just Heineken beer. Now people will give it more consideration,” says Holmes.

He adds that Interbrew’s takeover of Canadian brewer Labatt’s in the mid-Nineties might not have taken place had the Belgian brewer been stock market-listed rather than family-run, as it would have been considered too dilutive of earnings. “A family-owned company has the luxury of a longer-term view. But it can work both ways – it depends on the family in question.” he says.

Other family-owned concerns have had difficulties with external executives. The recent history of the Ford Motor Company is one where the emphasis has switched between family control and outside influence, according to how well it is doing. There are reports of boardroom fall out as chief operating officer Sir Nick Scheele is understood to be in conflict with vice-president of international operations David Thursfield. Chairman Bill Ford is reported to have brought in executive coaches to bring the warring factions together. But the business is struggling with a falling share price and a collapse in profits.

According to one source, the company appoints family members in times of crisis – the appointment of William Clay Ford in April 1999 being an example of this. “When Bill Ford announced that they were forming a joint office with him as chairman and Jac Nasser as chief executive, people were giving Nasser just months to survive,” says the observer. In fact, Nasser survived until the middle of 2001. “Nevertheless,” continues the insider “the idea of joint chairman and chief executive was the family’s way of saying ‘we don’t trust the outsider with our company and we want to take control back.'”

A family structure can help enhance brands by giving an element of expertise and closeness to the business, according to Paul Jackson, chief executive of Ogilvy &amp; Mather – itself partly a family business. “If there is a significant family stake, it is more likely the family members are going to mind the performance of the company. They are likely to do it from a position of genuine knowledge, and will have a more informed view than an average shareholder,” he says. “It creates a different game. You are more likely to look to the long-term future success than short-term results.”

But this is not always the case. Many dynastic businesses find that the shareholding becomes diffused among family members with a multitude of agendas. Some wish to liquidate the asset and enjoy the fruits of their forefathers’ work, while others want to continue building the business. This happened in the case of gaming and stores group Littlewoods, whose structure made it difficult for the company to move with the times and take the quick strategic decisions needed in shifting markets.

Littlewoods found itself unable to cope with changes in the gaming market following the launch of the National Lottery and shifts in the high street clothing market with the rise of specialist retailers. The gaming branch of the business was eventually sold off to Sportech, and the retail business to another family concern, the Barclay Brothers.

The secret of their success

Retail is one of the areas where family concerns seem to thrive. Many of the retail success stories owe their origin to a founding father, be it Tesco’s Jack Cohen, Wal-Mart’s Sam Walton or Matalan’s John Hargreaves. Sainsbury’s was the classic family business that found it difficult to balance the interests of family and outside investors. As part of its plans for recovery during the past seven years, it no longer has a family member as chairman or chief executive.

Alcoholic drinks is another sector where family interests are powerful, with brewers Anheuser-Busch, Interbrew, Heineken and Holsten all family-controlled. On the spirits side, the Bacardi family is loosening its control over the world’s largest rum brand and preparing for at least a partial flotation. Other spirits giants such as Brown Forman and Pernod Ricard are also controlled by powerful families.

“It is an incredibly cash-generative business,” one analyst says by way of explaining the preponderance of private family ownership in the drinks business, an a feature which he believes also applies to the retail market. “Capital acquisition through a stock market launch is not a massive requirement. It is a ‘steady eddy’ business if you build it well with a long-term perspective, you can make a lot of money. If you are short term, you won’t,” he adds.

He believes family-owned concerns such as Bacardi, Pernod Ricard and William Grant may plan some kind of alliance, given that they have complementary portfolios and ownership structures. This would allow them to compete with global behemoths such as Diageo and Allied Domecq while retaining their family structures.

Some family companies insist their family members are suitably qualified before taking up positions within the company. At British regional brewer Charles Wells, for example, family members have to work in other companies for five years before they are allowed to work at the brewer.

Despite the disappearance of many family brewers from the British scene in recent years, Wells has survived with a sizeable pub estate and brands such as the &£20m real ale, Bombardier. Sales and marketing director Nigel McNally believes that the family structure has been fundamental to the success of Bombardier: “A plc could not have invested in a brand in the way we did because the company realised they would not get an instant return, but it would take four to five years. Plcs would look for a return in 12 months.”

He says the recent rise in property prices has been responsible for the demise of many family-owned brewers as they found they could make more money out of their pubs by selling them off, rather than selling beer through them.

Family businesses appear to be a threatened species and are increasingly dependent on bringing in outside managers and marketers to lead them through a spell of consolidation. They will have to be on their best behaviour if they are not to scare these executives away.