Marketing budget increases hit their highest level for more than two years in the third quarter as marketers saw “fresh opportunities” around Brexit.

More than a quarter (26.2%) of senior marketers increased their ad spend during the third quarter, compared to 12.9% who registered a fall, according to the IPA’s quarterly Bellwether Report. This means the balance of marketers saying they would increase their spend stands at +13.4%, a rise of nearly three percentage points compared to the second quarter the highest level since Q2 2014. 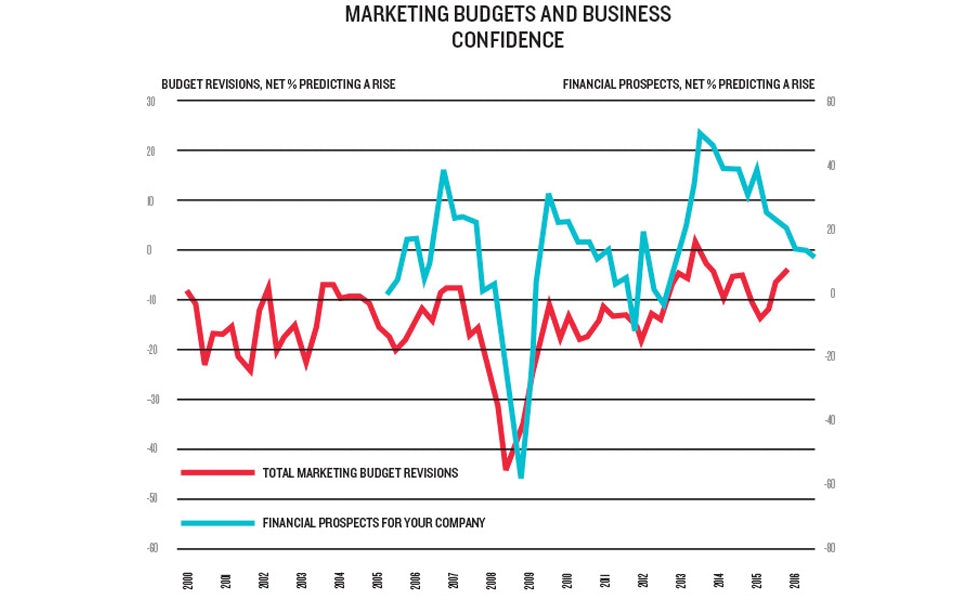 The numbers are particularly impressive given the negative repercussions many expected as a result of the vote to leave the European Union, according to economist Paul Smith, who authors the Bellwether Report. He says the third quarter results prove marketers are still finding business opportunities despite concerns over what Brexit will look like and the impact that will have on the economy and consumer spending.

Read more: Why Brexit is both an opportunity and a strategic risk for marketers

He explains: “Anecdotal evidence from the survey suggests that companies are seeing fresh opportunities around Brexit, perhaps willing to commit new marketing resources to maintain brand awareness and competitiveness particularly in overseas markets.

A year of two halves

“You will get a true sense of what is happening in March next year. I reckon the first quarter will be positive but come the second quarter marketing budgets will drop drastically and it will be very much a year of two halves.

He adds: “Nobody will want to throw millions at TV in the second quarter or maybe even the third, as they will be hesitant when planning as that’s when we will know if Britain will retain access to things such as the single market.”

Troy expects digital to continue its run of growth as it allows marketers to adjust their budgets. In the third quarter, digital saw some of the strongest growth of any sector, with a net balance of +9.5% of marketers increasing their spend.

It was beaten only by events with a net balance of +9.9%. Ad spend within PR, market research, main media advertising and sales promotion advertising all registered declines in the third quarter.

“If, like Chancellor Philip Hammond, we anticipate a rollercoaster ride then marketers must prepare for the ups and downs.”

Flexible budgets and plans to adjust when we have up and down quarters, that’s what will be key in these uncertain times,” says Troy.

And in responses shared only with Marketing Week it found that almost a third (29.5%) of marketers expect overall employment to be higher in three months’ time compared to now. This was more than double the proportion that predicted a fall (13%) and means a net balance score of +16.5%. 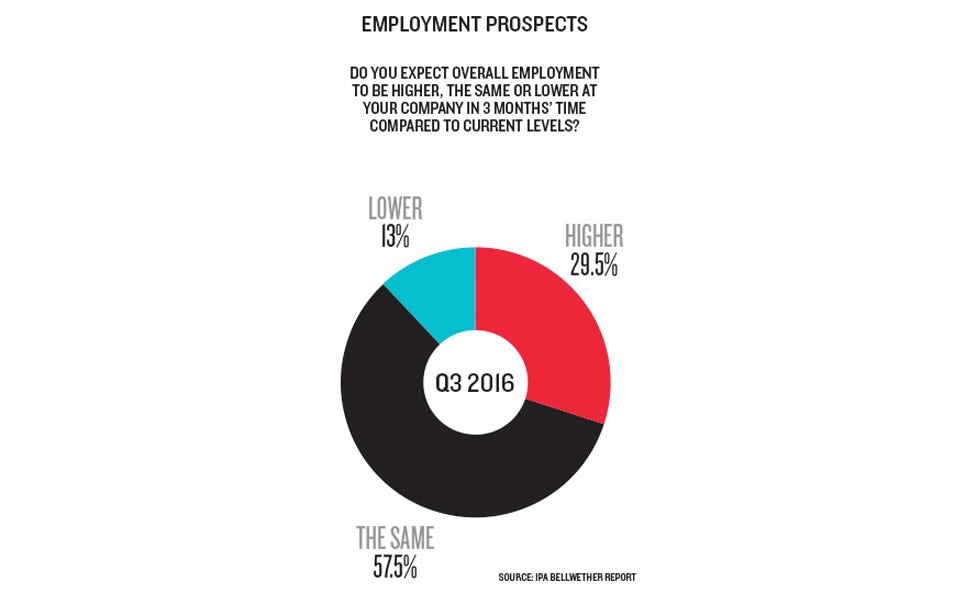 The figures suggest businesses are looking to continue investing in staff despite the uncertain economic and political climate, with many looking to take advantage of new opportunities and markets. However, there could be challenges going forward.

Smith explains: “Growth may be curtailed by reported difficulties in recruiting and retaining high quality staff, an issue that may be further exacerbated if the UK chooses to pursue a ‘hard’ Brexit and significantly reduce the ability of businesses to recruit from the EU labour pool.”

The outlook from consumers

Consumer confidence returned to pre-Brexit levels in September, according to GfK’s monthly index, while British consumers’ propensity to make major purchases rose two points to +9. However, Troy fears 2017 will be a very different story.

“We had record car sales this summer but I highly doubt that will happen next summer as consumers will be put off making big purchase decisions,” he explains.

“I wouldn’t expect [consumer confidence] to be up in 2017 and therefore it will be the financial officers, not the marketers, making the major decisions and planning adjustments around March.”

And marketers remain concerned about industry financial prospects. A net balance of -12.1% of respondents are pessimistic, down from -8.1% in the prior quarter and the lowest level since the end of 2012. And while marketers are a little more optimistic about their own company’s financial prospects, this fell to +10.6%, from +13.7% in the previous quarter.

Read more: Mark Ritson: If Brexit were a soap brand, life would be simpler

But with the third quarter growth in marketing budgets extending a current record period of four years of sustained growth, Smith says marketers should look on the bright side.

He concludes: “Given the increasingly influential role that advertising, marketing and the wider creative industries play in driving British output growth the latest Bellwether provides welcome news at a time when the country is grappling with heightened economic and political uncertainty following the Brexit vote.”

Many brands are still in a state of flux post-Brexit and while there are early signs of resilience marketers will need to be flexible to deal with ongoing uncertainty.