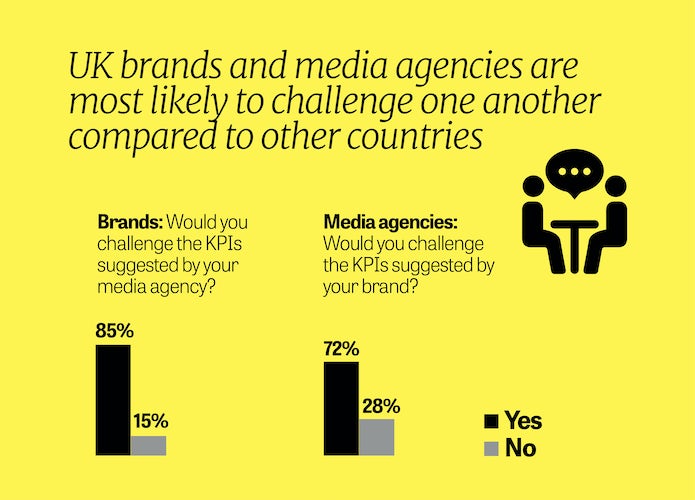 Media buying is under scrutiny like never before, fuelled by reports into shady tactics and agency rebates, as well as Facebook measurement errors and The Times investigation into ad fraud.

Procter & Gamble’s chief brand officer Marc Pritchard made perhaps the biggest call for change during his speech at the IAB’s Annual Leadership Meeting. He called out the “complicated, non-transparent, inefficient and fraudulent” media supply chain, which critics including Marketing Week columnist Mark Ritson believe is a sign of things to come.

Trust comes from both brands and agencies working towards a joint goal in an open and transparent way. But new research shows stark differences between the key performance indicators (KPIs) used by UK brands and their media agencies, causing friction between the two.

Indeed, clients and agencies in the UK are more likely than those in other countries to challenge each other’s KPIs in a landscape where there is a general lack of understanding and trust, according to the study by DataXu.

Nearly two-thirds (62%) of brands say they face challenges in getting valuable KPIs from media agencies, while 72% of agencies say the same of brands. Both parties have issues with the other not measuring the right KPIs but the data suggests it is a bigger problem for agencies, given 47% cite this as a concern versus 21% of brands.

Media agencies also say brands are not flexible with their KPIs (38% versus 24%), while almost half (47%) of brands believe agency KPIs are difficult to understand and they do not align with their business objectives (58%).

The three most used KPIs for brands are conversion rate (36%), shares and likes (34%) and cost per lead (31%), while for media agencies it is return on marketing investment (46%), website visitors or web metrics (34%) and repeat clients or business (28%).

Most CEOs dismiss [‘shares’ and ‘likes’] as a marketing team’s excuse for not having delivered tangible business results.

The top three KPIs that both brands and agencies use are return on marketing investment (35%), shares and likes (29%) and conversion rates (27%). The least common KPIs are share of voice, net promoter score and customer acquisition cost.

He adds: “This is followed by spontaneous awareness that drives direct-to-site traffic. I’m surprised that this key metric doesn’t feature more and ahead of shares and likes, [as it is] more impactful on performance.”

Troy is “not convinced” by shares and likes for two reasons. He says they are “not proven to convert into traffic or brand volume” and they are the metric “most open to manipulation by the agency and the marketing team”.

“That’s why most CEOs dismiss them as a marketing team’s excuse for not having delivered tangible business results,” claims Troy.

The good news is that 67% of respondents across the board say setting KPIs is a collaborative process between the brand and media agency, while 10% saying it is the agency’s job and 23% the brand’s.

Jonathan Earle, commercial marketing director at Dixons Carphone, expects the frequency of joint decision making to “creep up” as siloed ways of working are broken down. However, he says it is “alarming” that 10% of respondents believe setting KPIs is the media agency’s job. He says: “Even if it was 1%, it would be too high.”

He adds: “I don’t think it can be anything other than a collaborative piece because they haven’t got a choice. Return on marketing investment is under the spotlight – teams need to work together because ultimately you need to convince the shareholders or the board that the pennies you are spending [are] really important.” 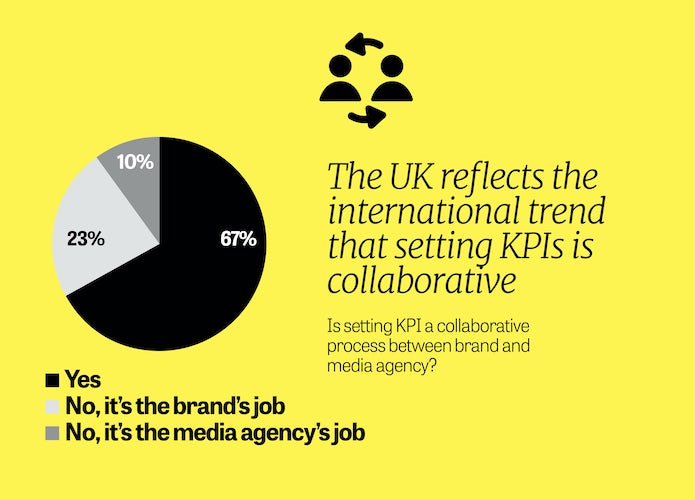 Agencies and clients need to “consider a brand’s overall health and seek to join up so-called soft and hard metrics”, according to Matthew Heath, chairman at agency Lida, part of the M&C Saatchi Group.

He says: “Brands and media agencies should create a dashboard for brand health that is balanced across commercially measurable metrics like the cost of new customers, sales and conversion rates, as well as across brand production and fame, and find a balance.”

Heath adds: “The attention paid to programmatic can make it easy to forget about the need to make a brand attractive. Agencies need to remember the importance of the big picture for brands, which starts with creating brand love for their audiences.”

Getting valuable KPIs is a challenge

Chris Le May, senior vice-president and managing director for Europe and emerging markets at DataXu, says the challenge both sides face comes from the lack of “a scientifically and statistically robust method of being able to measure ROI”.

He says: “[Brands and media agencies] don’t have a plethora of skill sets, in terms of staff, to understand the intricacies, challenges and pitfalls of misinformation in correctly calculating ROI.” 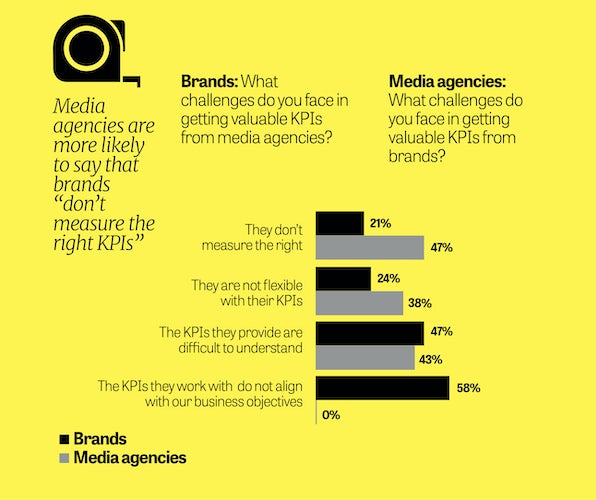 Agencies are willing to change the parameters of the business model with brands in terms of remuneration, according to Le May, who claims agencies “are actively seeking out solutions that both the agency and brand can feel comfortable with because it has credibility and stone cold mathematics rather than opinion”.

He says: “An agency can be remunerated based on its effectiveness in terms of what it delivers back to the brand in exchange for the marketing investment the brand makes.”

Le May adds: “What we have seen in terms of trust and transparency [being called out] over the past 12 months can only be a good thing [and encourage people] to get together on the same page.”

Transparency and trust can be built through sharing of information too, according to Elliot Parkus, managing director at Arena Media – part of Havas Media Group.

He says: “We have clients where I get second-by-second stats from their websites, so I have absolute clarity of what is going on in the business. That enables me to know what levers I can pull to grow their business as much as possible. In a proper partnership, there are no issues with sharing that much information.”

Brits are more likely to challenge each other

Brands and media agencies in the UK are most likely to challenge one another’s suggested KPIs compared to other countries such as Germany and France, with brands (85%) more likely to do so than media agencies (72%).

“The Brits are slower in moving from the old ways of working to the new way,” says Dixon Carphone’s Earle. “With barriers to entry at an all time low and the opportunity of having a new competitor come in at any time and take your lunch overnight, no one can afford to be as combative as it feels like these findings suggest.”

Parkus at Arena Media believes that “a bit of disagreement is healthy” and “respectively disagreeing with each other is the sign of a good and healthy relationship.”

However, he adds: “Broadly having a disagreement about what we should be trying to achieve for our clients is a bit of a worry. Everything we do should be focused on growing our clients’ business; if not we are optimising to the wrong metrics.”

When asked why they would challenge agency KPIs, UK brands feel very certain they know which KPIs are best suited to them (77%), while 27% claim the agency has different objectives and 12% do not trust the agency to make suitable suggestions.

For UK agencies, 57% believe they know what KPIs are best suited to the brand and 55% see it as the media agency’s role to challenge the client.

In order to build a successful relationship, brands and their media agencies need to work collaboratively to ensure any relationship is grounded in trust.

If brands are going to innovate and win back consumer trust, then marketers need to call their agencies to account, says Robin Bonn, founder of Co:definery.