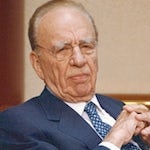 Speaking at the Centre of Policy Studies last night (21 October), in a speech mainly praising former Prime Minister Margaret Thatcher, he talked about how he and News International had help change the newspaper landscape in the 1980s to the “uniquely vigorous press we enjoy today.”

He says: “Our new world is one of modern mass communication, phone and text, without limit. Democracy will be from the bottom up, not from the top down.”

“Even so, a free society requires an independent press: turbulent … enquiring …
bustling … and free,” he adds.

“It would certainly serve the interests of the powerful if professional journalists
were muted – or replaced as navigators in our society by bloggers and bloviators,”

“Bloggers can have a social role – but that role is very different to that of the
professional seeking to uncover facts, however uncomfortable,” he says.

He also referenced his critics at the time of Sky’s inception, adding that some said its launch was “worse for Britain than the blitz.”

“At Sky we built satellite television service from the ground up after others had
abandoned hope and investment,” he added.

His comments come as NewsCorp is in talks about the full acquisition of broadcaster BSkyB, of which it currently owns 39.1%. The move has seen other UK media owners collectively write to Vince Cable to investigate such a deal under the Competitions Act.

In its latest figures, announced today (22 October), Sky reported it had acquired 96,000 customers over the last three months, taking the total customer base to 9.956 million.