With the Government kicking off its £75m anti-obesity drive this month, to add to the traditional New Year’s resolution diets, the nation’s weight has never been higher on the agenda.

The latest data from the British Market Research Bureau reveals that 60% of British women and 40% of men aged 15 or above have felt overweight at some point in the past 12 months, while 38% of women and 19% of men agree that most of the time they are trying to lose weight.

These figures reflect an upward trend in dieting and calorie-counting. Since 1998, the proportion of British adults who always think of the calories in what they eat has increased steadily from 18% to peak last year at 24% (29% of women and 17% of men). Today, 19% of women and 7% of men diet regularly, 23% and 13% respectively diet sometimes, while 19% and 16% diet occasionally.

Three-quarters of regular dieters are women. The data suggests they are most likely to be middle-aged and in the lower social grades. People living in the Midlands and North-west are most likely to diet regularly, while those living in Greater London are the least likely. Interestingly, men who diet regularly tend to be motivated by the desire to look young. They are a quarter more likely than the average man to believe it is important to keep looking youthful. However, women who diet regularly are no more likely than the average British woman to be motivated by this concern.

Although the popularity of diets and dieting may be driven in part by the need to look good, trend data suggests it has more to do with increased awareness of health issues. This is apparent across a range of measures – not least the fact that since 1988 the proportion of adults undertaking some form of sport or exercise at least once a week has increased from 42% to 54%.

Several measures suggest that as a nation we are eating more carefully. For example, the proportion of adults who try to include plenty of fibre in their diet has now recovered to about 60% after declining in the mid- to late Nineties. Meanwhile, the number of people who think that fast food is “junk” has increased from 31% in 1998 to 38% today.

This latter trend – increased scepticism toward fast food – may reflect a renewed interest in home cooking and fresh ingredients. Since 2000, the proportion of adults who say they do not have time to spend preparing or cooking food has fallen from 21% to 15% today. Over the same period, the number of people who like to try new recipes has increased from 51% to 61%.

The new recipes people try out are perhaps more often than not accompanied by pasta or rice rather than bread. The proportion of British adults who eat Mediterranean-style cuisine has increased steadily over recent years to about 32%. Since 2001 the number of adults who eat a lot of bread has fallen from a total of 49% to 44% today.

Taken together, these cultural shifts have driven the growth of various sectors within the food-production industry – not least the proliferation of “diet” food and drink products. The research reveals that today a quarter of adults always look for the light or diet versions of food and drink, while a fifth consume “diet” products – up slightly from 19% five years ago. Although a recent report from Which? has criticised many “diet” versions as being no healthier than standard options.

Some 60% of those who consume diet food and drink products are women. Taking men and women together, those most likely to consume these products are aged 25 and 34 years old. People in this age range are a quarter more likely than the average adult to use diet products.

In recent years, better food labelling and increased awareness of nutrition issues has driven demand not only for products with reduced calories and fat, but also reduced sugar and – more recently – reduced salt and low GI (glycaemic index). Since 2001, the proportion of adults who avoid sugar has increased from 33% to 39%, while the proportion who avoid fats has risen from 39% to 42%.

More than half of all adults now avoid or limit products with a high salt content, and about half avoid artificial preservatives, colours and flavours, and high cholesterol content food. One-quarter avoid or limit their intake of dairy products, while 20% do the same with high GI products.

The number of adults who tend to drop meat from their diet has remained stable at about 14%. The proportion of adults who are strictly vegetarian has stayed at about 6%.

Interestingly, more than half of all those who say they never diet avoid or limit their intake of fats and sugar, and more than 40% avoid or limit products with a high cholesterol content. If these present trends continue, the short-term low-cal low-fat “diet” (and variations thereof) may increasingly be superseded by a more sustainable approach supported by genuinely healthy options and quality ingredients. 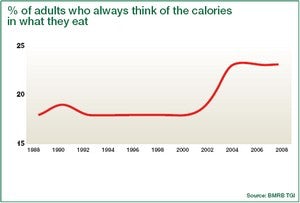 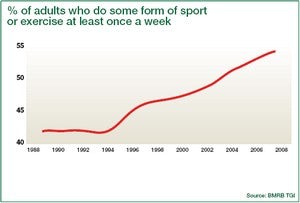 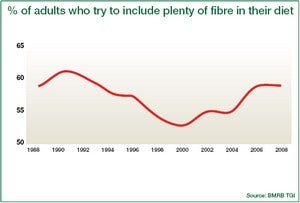