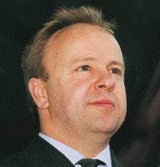 British Airways commercial director Martin George is to be promoted to chief marketing officer, with a seat on the board, at the company’s annual general meeting next Tuesday. He will be the first BA marketer to make it that far up the corporate ladder.

The move comes as BA reviews its £60m ad account, held by M&C Saatchi, for the first time in ten years – a move that threatens its long-standing 23-year relationship with the Saatchi brothers.

George, who has been with the airline since 1987 and will be an executive director, will become one of a handful of marketers to have been appointed to the boards of major companies.

He follows in the footsteps of marketers such as Mark Sherrington, who was appointed to the board of drinks company SABMiller in 2002; and Tim Mason, who has been a member of the Tesco board since 1995.

George has risen through the marketing ranks at British Airways and was marketing director before he was appointed commercial director in August 2004.

BA acknowledges that it has effectively marketed itself out of trouble in recent years, and before the appointment of former Aer Lingus boss Willie Walsh as the airline’s new chief executive, replacing Rod Eddington later this year, George had been tipped for the top post.

Analysts argue brands will have to be careful where they place their products, as governing bodies and tournament holders will have to “bow down” to influential athletes who desire to set a good example to the future generation.