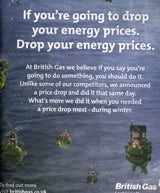 However, British Gas says that its cuts were effective immedeatly and helped cut bills in the cold winter months, while its rivals cuts will come too late.

The ad continues: “At British Gas we believe if you say you’re going to do something, you should do it. Unlike some of our competitors, we announced a price drop and did it the same day. What’s more we did it when you needed a price drop most – during winter.”

Npower announced its cuts yesterday with the reduction taking effect on 26 March.

E.on announced on Monday (8 March) that it will cut bills by 6% from 31 March. Scottish & Southern’s cuts will also take effect at the end of this month.

Energy suppliers came under attack from Energy secretary Ed Miliband last month who called on suppliers to cut prices. The comments followed a report by regulator Ofgem that found that firms had boosted margins by £30 for a typical dual fuel customer in recent months.