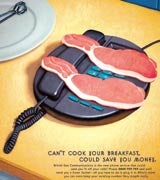 Once appointed, the new employees will work alongside the existing marketers who report to British Gas director of marketing and strategy Nick Smith.

Mann’s appointment was followed by the appointment of food marketer Rupert Trevelyan to the role of head of segment marketing (MW March 22, 2001). Trevelyan was previously UK head of promotions at food company The Compass Group’s international branded food service division.

British Gas recently appointed Clemmow Hornby Inge to handle its £30m advertising account, in place of BMP DDB, incumbent on the business for 12 years (MW May 8).

The two agencies were shortlisted alongside WCRS and M&C Saatchi to pitch for the business.

Last year the utility company consolidated its media planning and buying into Carat. The agency was appointed following a four-way battle that pitched incumbents Carat and OMD UK against MindShare and Zenith Media (MW May 30, 2002).

Blood is thicker than water. That is the saying that marketers should perhaps bear in mind when considering joining a family-owned concern. There is no doubt an innate fear of being treated as a hired hand and an outsider. In the face of strong family ties and pressure to adhere to heritage and tradition, many […]

Volkswagen is supporting the launch of its luxury car, the Phaeton, with an online media strategy whereby highly targeted online advertising takes visitors to the centrepiece of the launch – thephaeton. Tribal DDB, the agency that devised the campaign, collaborated with media owners such as Digital Look, Autoexpress, CNN Traveller, Classic FM and The Times.

EasyGroup founder Stelios Haji-Ioannou is suing London-based Easybroker International, an equity brokerage company, over use of the word ‘easy’. EasyGroup has an easyMoney credit card.