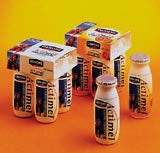 Britain believes it is a healthy nation. More than half the population claims to eat a healthy diet and to be knowledgeable about healthy eating, according to a recent report from market research company Key Note.

The report shows that 53 per cent of Britons claim they think about the nutritional value of what they eat – a figure that has risen ten per cent over the past year. But the increased interest in healthy eating is not translating into further growth in the functional-food market, with sales of such products declining in the past 12 months.

The drop in sales compares with a significant 25 per cent growth in 2002 which, however, does mean the category is still growing faster than more traditional food products. The Key Note report suggests the downturn in the market is partly due to it reaching a level of maturity, but also due to problems attracting new consumers.

Key Note estimates that the functional foods market was worth £526m in 2003 and predicts that it will grow by more than 28 per cent by 2008. The products showing the most growth are soya milk and probiotic yoghurt drinks, such as MÃ¼ller Vitality and Danone-owned Actimel.

The main driver of growth in this market is consumers’ continuing interest in healthier lifestyles. But the UK’s ageing population is also having an effect, as consumers tend to become more interested in functional foods as they grow older. The “greying” population is particularly interested in products that address the conditions and illnesses associated with old age, and which can contribute to a longer and better quality of life.

This would support the idea that consumers are becoming more aware of how to adjust their diet to avoid such illnesses. The report shows that a fifth of shoppers claim to buy cholesterol-lowering margarines regularly, with a further 20 per cent claiming to buy them occasionally. Only 12 per cent of respondents claimed to buy probiotic yoghurts or yoghurt drinks regularly, although a further 17 per cent were occasional buyers. A quarter of respondents claimed to buy fibre, vitamin or mineral-fortified bread occasionally.

Britons seem to have fairly clear intentions about what they should eat. More than a third of respondents – split evenly between men and women – say they would like to eat healthy foods more often. Older generations feel they are achieving their goal of eating healthily already, but nearly half of 15- to 24-year-olds want to eat healthily more often. This clearly indicates that this age group recognises its diet is not healthy and is an area of potential growth for functional foods, if manufacturers can target their marketing effectively.

It is essential to the success of functional foods that they are promoted in a credible way. A review of the regulations regarding the health claims used by functional-food manufacturers is under way. They are not allowed to make direct medicinal claims and some scientific evidence is needed to support any stated levels of reduction to the threat of suffering from any debilitating illnesses. UK regulations on the claims made about functional foods are being aligned with the rest of the European Union.

The Government is likely to continue supporting functional foods, providing there is sufficient evidence of their benefit to public health, as it encourages people to take more effective control of their own health. This will include supporting the supply of functional foods and drinks in the future, especially with growing demands on the already overburdened NHS caused by diet-related diseases.

The biggest potential threat to the functional-foods sector is genetically modified (GM) crops. The ability to grow healthier foods is often seen as one of the main benefits of growing GM crops. There is considerable opposition to growing such crops and it remains to be seen whether any substantial progress is made in the UK on GM-related functional foods.

Functional foods cost more than their non-functional equivalents, particularly cholesterol-lowering margarines and spreads. However, the continuing increase in people’s disposable incomes will help the growth of the sector, as will the interest from the over-50s, who are more affluent, better educated and more health-conscious.

The combination of an increasingly health-conscious population and declining birth rates in the UK means the population will live longer. This is likely to boost the interest in functional foods among consumers wanting a healthy, longer life. Interest in functional foods among government departments responsible for healthcare and food manufacturers looking for higher margins is also likely to grow. So, despite its current dip, the functional-food market looks set to continue in fine health.