After 15 continuous months of positive growth numbers, consumer confidence levels fell back into negative territory with a -3 score in April. All of the measures used to calculate the Index, including personal financial situation, general economic situation and major purchase index, also saw declines this month.

The major purchase index, which analyses consumers’ propensity to make a major purchase such as a house, car or other big-ticket items, fell six points to a score of 5. This is one point lower than the same time last year. British consumers are also feeling more compelled to save. The savings index hit 5 this month, which is seven points higher than in April 2015. 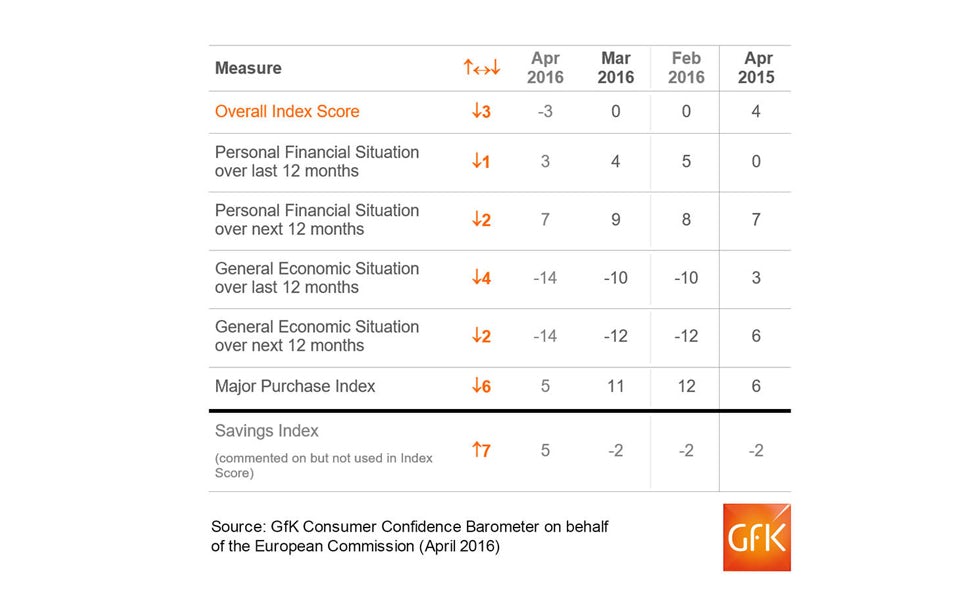 Joe Staton, head of market dynamics at GfK, says the upcoming Brexit referendum, which will decide if Britain stays in the EU or not, has led to an increased number of Brits wanting to save money.

In March, consumer confidence levels stood at zero, while fewer people were also compelled to save money. Station says this month’s data proves Brexit concerns have deepened even further.

“We don’t include the savings index in the overall index score, but it is the only indicator to go up this month. When people feel unsure about the recent past and the immediate future, is it a natural instinct to try and put some money away? You could say yes,” he told Marketing Week.

“The politicians are trying to sway us one way or the other over Brexit with their opposing ‘Vote Leave’ and ‘Britain Stronger in Europe’ campaigns, and the numbers certainly show the debate is tugging at our confidence too.”

The biggest dent to confidence comes from consumers’ depression about the general economic situation in the UK for the next year. Consumer confidence around the nation’s economic outlook decreased by two points to -14 this month, which is 20 points lower than in April 2015.

Meanwhile, consumers’ current perceptions of the general economic situation of the country over the last 12 months has decreased by four points this month to -14. This is 17 points lower than this time last year.

Staton concluded: “Trends in confidence show our degree of optimism about the state of the economy and this indicator will make for interesting reading between now and the EU referendum on June 23rd.”