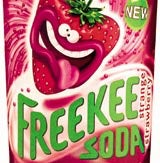 Britvic Soft Drinks has axed Tango Strange Soda, its ill-fated new product for children, after less than a year.

The drink, a carbonated milk, fruit juice and water mix positioned as “texture-based fizz”, was designed to create a new soft drinks category.

Strange Soda’s launch was beset by difficulties and it was forced to change its name twice. Prior to launch it was to be called Freekin Soda, but feedback suggested the word could be unsuitable as it is a substitute for a swear word (MW January 16, 2003).

The product launched as Freekee Soda with an advertising campaign by Clemmow Hornby Inge, but in September had to change its name to Tango Strange Soda following a legal challenge from a European confectionery manufacturer (MW August 14, 2003).

Britvic earmarked &£6.25m for the drink’s launch and ploughed &£632,000 into advertising for the year to September (Nielsen Media Research). Campaigns carried on into the last quarter.

Insiders criticised the product for presenting a confused customer proposition and for being priced too high. Britvic slashed the price for the September relaunch, but the drink has been under review by multiples.

Britvic category director Andrew Marsden says: “Tango Strange Soda has achieved retail sales of &£3.4m. However, the concept of the drink has proved too challenging to consumers and the brand has not delivered against our expectations.”