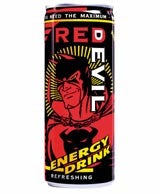 Britvic bought the cherry-flavoured energy drink in August last year (MW August 29, 2002) to widen its portfolio and grab some of the £250m spent on energy drinks in the take-home market. The drink will compete in a still growing sector against brands such as Red Bull, Burn and Shark.

Hicklin Slade worked on the launch of Britvic’s previous entry into the functional energy market, Carbon, launched in late 2000. Carbon was created as a stimulant mixer for dark and white spirits and has now been axed. MindShare will handle media planning and buying.

The campaign for Red Devil is still being formulated, but is likely to include radio, digital and outdoor advertising and a sampling programme.

Red Devil was launched in the UK in 1998 with distribution rights held as a franchise by the Maritime Foods Group. The brand gained notoriety with a television advertising campaign featuring former footballer Vinnie Jones encouraging a bird to fly into a window.

Hicklin Slade was founded five years ago as an integrated agency, and clients have included Camelot and Guinness UDV.