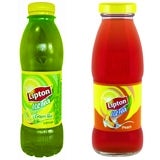 Cold hot drinks, which includes chilled teas and coffees, overtook the smoothie category in growth last year, up 123% in volume and up 92.7% in value to £14.9m, according to the Britvic Soft Drink Report.

The soft drinks manufacturer aims to reach 1 million UK consumers in nine major cities this summer. Britvic says that its research shows that when people try Lipton Ice Tea, 80% go on to buy the drink.

Jon Evans, head of seed brands at Britvic, says Lipton Ice Tea is set to be “the next Innocent Smoothie” of the drinks sector.

He adds: “We are reinvesting in Lipton Ice Tea every year and this summer’s sampling campaign should reach 3 million people with word of mouth.”

The soft drinks manafacturer aims to double the amount of people it reaches in its summer sampling campaign in 2012.

Sampling stations, bearing the tagline “don’t knock it ’til you’ve tried it”, will feature the game of “knokkers” – a mixture between pool and bowls – to encourage consumer engagement with the brand.

The summer campaign will also be supported by a dedicated Facebook site, named “don’t knock it ’til you’ve liked it”, to ensure consumers are engaged with the campaign even after the summer sampling has finished.

Lipton Ice Tea is owned by the joint venture between Pepsi and Unilever, PLI. Britvic began bottling the brand under licence in 2008 and claims the brand is now worth £7m.

Starbucks introduced a range of bottled frappuccino drinks for the retail trade last month in a bid to become an FMCG brand.