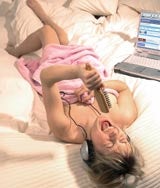 The broadband revolution is galloping ahead, with 50,000 new customers signing up each week. But there are still doubts about where the new technology is heading and how long it will take the industry to surmount some considerable obstacles strewn in its path.

Last week’s announcement by communications regulator Ofcom that it was planning to find British Telecom guilty of breaching competition rules over the pricing of its broadband services underlines the state’s fresh efforts to clear the way for a high-speed digital revolution.

Over the past year, the number of broadband connections in the UK has more than doubled to over 4 million. AOL has signed up more than 500,000 broadband customers, Wanadoo has some 375,000 and Tiscali has more than 300,000. Meanwhile, BT, the market leader with a 41 per cent share, saw its share of new subscriptions suffer in the first quarter of the year as its three major rivals attacked it with aggressive price-led advertising. Cable operator NTL has signed up 1.09 million of its 8.7 million customers to broadband and, as of August, Telewest Broadband claimed 538,000 broadband internet subscribers.

But some observers warn the obsession with price that has gripped the market since the beginning of this year could cost the service providers dear in the long run. The price war started last October, when Tiscali began offering an “entry-level” always-on connection at £15.99 a month, for 150 kilobits per second (Kbps), the slowest speed on offer, and targeting dial-up users already paying this price. The situation has snowballed and Wanadoo recently launched a 1Mbps service (more than six times as fast as Tiscali’s basic offer) for £17.99 a month.

“The market is quite price- sensitive at the moment and this reflects the fact that consumers aren’t being swayed by the features and benefits of the packages,” says Jupiter Research Europe analyst Ian Fogg. “That isn’t necessarily a good thing for service providers: it leads to lower revenue per user and will create difficulties in the future about retention of customers. If they sign up on price, they are more likely to switch on price.”

Fogg says that providers will need to offer more unique benefits if they are to push up prices, but says the players are themselves hamstrung by a lack of choice in providing the broadband connection. “In the UK market, there are three infrastructure providers: BT, Telewest and NTL. All the broadband players rely on BT or cable, so it is hard to differentiate the products.” Many providers offers parental control, anti-virus and firewall capabilities, but little of any exclusive added value.

But while broadband offers higher speeds at entry prices not much greater than old-fashioned dial-up services, some customers may wonder about the advantages of this. Successful internet sites Amazon, Ebay and the likes of Friends Reunited work perfectly well with a dial-up connection, while entry-level broadband speeds of 150Kbps or 300Kbps are not fast enough to exploit the full glories of broadband, such as viewing high-quality video clips.

While mention of slightly faster speeds may persuade people to think about a broadband upgrade and price is determining which brand they choose, researchers at NOP World have noted a surprising lack of clarity among consumers about the basics of the broadband offer.

Niall Rae, director of NOP’s Internet User Profile Survey, says: “There are a lot of different speed offerings, but our research suggests people are not particularly aware of the speeds they can have: they are offered broadband and assume it is all the same.” He thinks the huge variations in speed on offer – from twice to 40 times as fast as dial-up – end up confusing many consumers. NOP World’s survey has also found that few people are using broadband to its maximum potential to download music, video and software. Only ten per cent of broadband subscribers are paying to download content.

As the summer draws to a close, broadband providers are gearing up to make new offers of content such as broadband television and video-on-demand (VOD). But to use these, consumers will have to upgrade to higher broadband speeds.

Pushing people up the broadband ladder – persuading them to pay higher monthly fees for the greater speeds necessary to access TV-quality content – will require aggressive marketing. Having already agreed to pay more for basic broadband, consumers may not take kindly to being asked for even higher subscriptions.

Ultimately, broadband is gearing up for a showdown with digital television over domination of the delivery of entertainment to the nation’s living-rooms. It seems hard to believe that the combined might of the BBC and its Freeview box, and Sky, which is relaunching its personal video recorder (PVR) Sky Plus with a massive direct mail push this autumn, will be unseated by the broadband upstarts.

The onslaught against traditional TV comes from the likes of Microsoft’s broadband-driven Media Centre, with its own version of the PVR. Wanadoo launched the LiveBox last month, offering wireless connection so users can even access broadband in the garden. Live Box will also be used for the VOD services Wanadoo is planning to launch “in the coming months”. BT is rumoured to be announcing a broadband TV box some time this year and other offers are on the starting block. Tiscali plans to launch pay-per-view movies through broadband this year.

The real broadband revolution requires the unbundling of the local telephone loop – allowing outside players to run their own lines. With local-loop unbundling (LLU), providers will be able to control what services they run and to offer differentiated products that are not available at present. LLU in France over the past 18 months has allowed Gallic providers to offer voice services, movies and much higher speeds. BT recently announced a 70 per cent cut in prices for access to the local loop, but there are still many questions about what form unbundling will take, what outside providers will be permitted to do and when it will all happen.

Broadband does seem to be the favourite to become the dominant form of information and entertainment delivery in years to come. But providers will need to educate customers more about its full potential, and take control of the means of delivery, if they are to fight off TV.