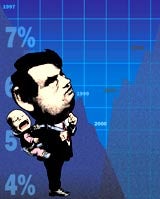 There were ISAs, then stakeholder pensions. Now, government-backed trust funds for babies is the latest device that Chancellor of the Exchequer Gordon Brown is turning to in a bid to create a savings culture in an otherwise spendthrift society.

The Chancellor’s proposal last week to open a trust fund for every new-born baby is just one measure in a four-year struggle to encourage people to save. And for once, it was warmly received by an otherwise sceptical financial services industry.

Just how the cash will be spent when the child reaches the age of 18 is uncertain, but there are still a couple of decades left before such decisions have to be taken.

It is the most eye-catching manifestation yet of Labour’s desire to promote saving and increase the share of the population who take savings and pensions seriously – estimated at 15 per cent.

Blatant pre-electioneering it may be, but many believe the “baby bond” scheme will be successful in overcoming the public’s general mistrust and lack of interest about savings products. So far, Brown has only had mild success, and some say his strategy has been a complete disaster.

Since Labour came to power in 1997 the household savings ratio, which monitors people’s saving levels, has almost halved from 10.6 per cent in mid-1997 to 5.5 per cent at the end of 2000. According to the Association of Unit Trusts and Investment Funds (AUTIF), unit-trust ISA sales dropped from &£10.4bn in the year to 2000 to &£9bn in the following year.

Much of this is attributed to the strong UK economy, which has made people feel financially optimistic and therefore deterred them from saving. In addition, the new-economy stockmarket crash last year has made people more cautious of share-based ISAs. But this only gives the Government more reason to encourage people to ignore economic trends and see saving as a long-term effort.

The foot-and-mouth outbreak has made the Government’s job even harder. The month before the outbreak, the Government launched a &£6.5m campaign encouraging people to take out pensions such as the stakeholder pensions introduced in April.

Unfortunately, the campaign, created by Delaney Lund Knox Warren, pictured two sheepdogs rounding up their herds, with one dog talking about the importance of having a pension. The campaign abruptly disappeared from TV and cinema screens once sheep began being herded up as a preliminary to slaughter.

It was sheer bad luck, but was perhaps an uncanny reflection of the Government’s hapless attempts to encourage saving over the past few years.

The Government’s commitment to promoting savings products is unclear. The Treasury says it doesn’t have a figure for its total ad spend on financial products. However, it is believed to have spent &£1.5m promoting the launch of ISAs.

The Treasury says the Financial Services Authority, created in 1997, aims to help people understand which products are available. And it is introducing Cost Access Term (CAT) marks across a range of financial products, which will essentially be a charter mark of quality.

The Treasury is also proposing a Universal Bank for the 3.5 million people who don’t have bank accounts. But the creation of the bank appears to be as much about helping the DSS pass on benefits electronically as it is about encouraging those on low incomes to save.

A spokesman says: “It’s difficult to say whether we’ve been successful [in marketing products]. Certainly we’re not complacent.”

Abbey National director of savings Janet Connor says that in order to create a savings culture, the Government needs to take greater responsibility for marketing savings products. She believes the Government has been keen to introduce products but has failed to tell the public about them properly.

She says: “The Government has put the onus on the consumer to save but perhaps the public’s financial literacy has been lagging.” She adds: “We need to see government consistently supporting the industry and taking a greater share of the (marketing) responsibility.”

The Financial Services Authority has so far featured in the public eye as the body which is deciding compensation levels for more than 1 million people who were wrongly advised to transfer from occupational schemes into personal pensions between 1988 and 1994. So far, &£5.8bn has been awarded in compensation to 660,000 people. In total, &£11.5bn is expected to be distributed to 873,000 people. This should be completed by June 2002.

Daniel Godfrey, director-general of the Association of Investment Trust Companies, says: “People are scared that they will get ripped off. This is partly because they don’t have a great deal of knowledge about financial services, which leads to a lack of confidence in products.

“There have been various scandals over the past ten years. I don’t think it’s one episode, it’s a steady drip, drip.”

In 1998 the Government set up the Pensions Education Working Group to give consumers information on pensions in plain English. The working group has since been disbanded and general research into pensions is now conducted by the FSA.

Many believe it is the role of government to educate people about the financial products on offer and instil confidence in them. Take-up of cash ISAs, which are akin to traditional savings accounts, has increased. From April 1999 to January 2000, 3.2 million cash ISAs were subscribed to. From April 2000 to January 2001 the figure rose to 4.39 million. No figures are available yet for after this date. But their more complex cousin, the stock market-related ISAs has seen take-up decline.

AUTIF spokeswoman Clare Arber says people who are considering stock-based ISAs often don’t realise that they need to be seen as a long-term commitment.

She says: “A lot of investors have been put off by not fully understanding stock investments. There are caveats to say stocks go down as well as up but some investors don’t appreciate that.”

The “baby bond” scheme is welcomed by Abbey National’s Connor, who says she believes it is simple to understand and places importance on encouraging saving from a young age.

Norwich Union Life director of consumer marketing Simon Quick agrees that the scheme is a good idea. But he also questions whether the Government has done enough to market the general range of financial products, particularly the change from TESSAs to ISAs. “As long as the products are simple enough to sell they will be successful. But it takes a long time for people to pick up on the language of financial products and it disturbs people when they change.”

The Conservatives are so concerned that products have become bewildering for the public that they are adopting a “back to basics” policy. Under their proposals, tax on traditional high and low interest accounts will be scrapped to encourage saving. This will cost the Treasury &£3bn, but the Conservatives believe they can save &£8bn by cutting unnecessary spending and benefit fraud.

Oliver Letwin, shadow chief secretary to the Treasury, says: “The Government has done very badly at persuading the public to save, which is surprising given the large number of initiatives.”

Letwin acknowledges that the strength of the economy has contributed to the downturn in saving levels, but he adds: “The Government is suffering from ‘initiativitus’. You have to engage in the ISA scheme to get the benefit. What we are proposing is universal.”

However, Abbey National’s Connor questions the proposals. “I don’t think they [the Conservatives] will target people who don’t already save.”

The Government’s latest effort has been applauded for attempting to give people a real incentive to save. But how it promotes and educates the public about the scheme is critical, as is how it promotes financial products across the board. Financial companies rely on the Government to invest in a coherent long-term strategy in order for them to market their individual products successfully. As Norwich Union’s Quick says: “If the Government establishes the framework, we can follow through with the detail.”

Canon UK has appointed EPB Communications to handle the launch of its range of colour printers and fax machines. The launch campaign, which is worth up to £2m and breaks later this month, will include press and poster ads as well as an online campaign created by EPB’s sister agency, Kioken UK. The ads will […]

The Â£10m Carphone Warehouse advertising account is poised to leave TBWA/London, following the decision by two of its senior management to set up a new agency.

Granada Enterprises has made three senior sales executives redundant,following the restructuring of its sales operation. ITV sales director Andy Farwell, who was responsible for handling all trading negotiations with London agencies, has been made redundant. Group account director Chris Nicholls and commercial ventures deputy executive director Tony Greenwood have also lost their jobs. The move […]