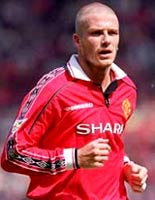 Three years ago when Brylcreem offered a reported £4m to David Beckham to be the face of its hair cream, it hardly expected the Manchester United and England midfield star to have his head shaved.

So when Beckham’s Real Story appeared on ITV, Brylcreem finally saw the chance to get its own back by placing its biggest TV advertising campaign since 1996 in one of the breaks – an ad which no longer features Beckham.

But as sweet as the scent of revenge may be, Brylcreem marketers can probably kiss goodbye to any early Christmas presents of free tickets and prawn sandwiches at Old Trafford they may have been hoping for.

GWR has restructured in to five UK divisions. The move is intended to make the group more responsive to the forthcoming relaxation of media ownership regulation. The Communications Reform White Paper, due to be published before the end of the year, is expected to relax media ownership limits and to clear the way for a […]

This year’s British International Motor Show has attracted a record number of exhibitors. Although deemed a commercial success, it has suffered from a low standard of exhibits.