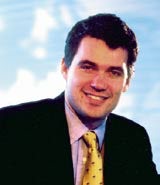 Patterson, who starts his new role on January 12, has been at Telewest for four years and is a former Procter &amp; Gamble marketer. He takes on a broader role than Porter, who had the title of managing director. Porter left BT in June to join Abbey as customer propositions director (MW June 12).

Patterson, who will report to BT Retail’s chief executive Pierre Danon, will also be in charge of defending the company’s fixed-line business and for driving sales of its BT Broadband and mobile services.