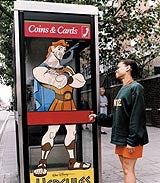 BT has put its phone box advertising business out to tender. The incumbent, Phonesites, has come to the end of its contract but has been invited to repitch for the business.

The new contract will last between three and five years, although the details have yet to be finalised.

BT introduced poster advertising sites inside its phone boxes in October 1998 and on the outside in April 2000. It now accepts ads on 20,000 phone boxes.

The company which tenders successfully will sell and manage all BT Payphones’ kiosk advertising activity.

But the sites, which BT says it needs to compensate for the declining use of payphones, was attacked last year by a coalition of influential organisations, headed by the Civic Trust, a charity which aims to improve the quality of life in UK towns and cities (MW January 25, 2001).

The coalition accused the telecoms giant of using its new kiosks as “a front for advertising hoardings” and said they posed a threat to public safety.

Telephone kiosk advertising is not covered by current town and country planning regulations. In July, the Government published a consultation paper to set guidelines for the medium, which could result in all such advertising requiring the approval of the local planning authority.