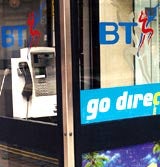 BT has been accused by a coalition of influential organisations of erecting telephone kiosks as “a front for advertising hoardings” and creating a threat to public safety.

BT may be forced to rethink how it runs the ads, after a coalition, led by the Civic Trust – an urban environment charity – together with a number of organisations including English Heritage, the Suzy Lamplugh Trust and Westminster City Council, raised objections with the ad sites.

The coalition claims the ad sites prevent people in the phone kiosks from seeing whether someone is lurking outside.

It also claims closed circuit TV operators believe the sites makes it easier for crime to flourish, as criminals are aware that they cannot be seen behind them.

The group is meeting with the Department of the Environment, Transport and the Regions (DETR) on Thursday to urge it to give planning control of the medium to local authorities.

Under current planning regulations, BT is not obliged to gain planning permission from local authorities. BT is to put its case forward at a later date.

The coalition also claims the ads, which are running on about 20,000 sites nationwide, are unsightly.

A spokesman for the Civic Trust says: “There are fewer and fewer people using telephone boxes, yet BT keeps putting them up. It’s just an excuse to exploit a new form of revenue.”

BT, which sub-contracts the business to a company called Phonesites, has retaliated, saying it has drawn up a voluntary code of practice.