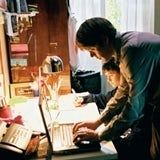 BT has axed its “More power to you” strapline after two years and replaced it with “Bringing it all together”.

The new line has been created by Rainey Kelly Campbell Roalfe/Y&amp;R – its first work for BT since winning the telecoms giant’s &£17m business account earlier this year.

“Bringing it all together” will also be used in BT’s &£40m consumer ads, handled by Abbott Mead Vickers. BBDO and featuring actor Kris Marshall. However, a spokeswoman for AMV claims it was BT rather than Rainey Kelly that devised the strapline.

The new business campaign is the next phase of activity to promote what BT calls the “digital networked economy”. St Luke’s created the original &£26m campaign 18 months ago (MW September 2, 2004) but decided not to repitch for the business when BT called a review at the end of last year.

A BT spokesman says: “The original campaign successfully established our credentials in the area of networked IT services. But we’re looking to move things on now. The new strapline reflects the way that BT’s services help everything come together.”

Until now it has used the “More power to you” strapline that was devised by St Luke’s and BT former marketing chief Amanda Mackenzie.