Football has had a dramatic month, even by its own hyperbolic standards. The social media boycott and European Super League fiasco have both, in their own separate ways, called attention to uglier sides of the beautiful game.

Now, with BT Sport presenting the Champions League Final tomorrow (29 May) and the Euro 2020 tournament just a fortnight away, football’s ability to unite as much as divide is at the forefront of two interrelated campaigns responding to the depressingly commonplace issue of online hate.

It’s something BT Sport staff and presenters have had to deal with on a near daily basis. The ‘Draw the Line’ campaign from BT, which launched last month, was envisaged as an awareness-raiser. Then this week came ‘Hope United’, created by Saatchi & Saatchi and positioned as a call to action to educate people about the impact of such behaviour.

As BT’s group brand and consumer marketing director Peter Jeavons explains, the campaigns are part of an ongoing internal discussion around what the company’s role and purpose should be, a process that began some 18 months ago.

“It’s something that we’ve consciously tried to move the brand towards,” he says. “BT is such an institution and a big part of people’s lives, but it didn’t really have a point of view on anything. We wanted to use the brand in a positive way, to find culturally relevant topics and moments that we can take action in, to see how we can play a meaningful role and do something.”

Under lockdown, Jeavons and his team came up with a series of campaigns and concepts. These included the ‘Tech Tips’ platform, designed to help suddenly housebound consumers get the most out of the tech at their disposal and connect with friends and family. Then December saw the release of anti-loneliness drive ‘Plus One’.

The idea for Hope United was driven by BT’s Home Nations sponsorship of the England, Wales and Scotland teams going into the Euros.

“We were looking at how to amplify our role within that and use it as an asset. This feels like a very important moment. It’s the Euros pretty much on home soil, we’ve got three of our nations in there, what can we do?” says Jeavons.

“At the same time, this whole situation around online abuse became a big focal point. It’s staggering what was going on. That’s where Draw The Line came from. They interlock together as two steps that we’re making towards trying to address this situation of online abuse.”

Both campaigns were turned around quickly to give them a sense of freshness and energy. Jeavons believes that, even at the earliest of planning stages, the creative’s ability to cut through was obvious.

“If you can react to relevant moments and move quickly on those things, that’s how you keep that freshness,” he says.

When it comes to consumers wanting a brand like BT to take a stand on social issues, Jeavons believes relevance is the key and tapping into issues that really matter to people.

“If you can demonstrate that then there’s a real role for brands to do things like this. If you don’t, I think that you’re more in danger of just becoming a product of what you sell, rather than something that has a point of view on the world,” he adds.

Measuring the success of the campaigns will more about soft metrics, but Jeavons says that so far the reaction among the public has been “phenomenal”. He’s even seen people using social media to apologise for their actions, prompted by the ads.

“Getting someone to do that is really exciting, because that’s where you start to get behavioural change, people doing something different because of this communication,” says Jeavons.

“And that’s by far and away the most important thing. You go into a campaign like this accepting that you can’t measure it by whether your brand metrics have moved by three or four points or whatever.”

BT is such an institution and a big part of people’s lives, but it didn’t really have a point of view on anything.

The growing sense of anticipation around both the Champions League Final and the start of UEFA’s postponed, continent-spanning Euro 2020 tournament has got all fans, casual and diehard alike, switching their attention to what happens on the pitch. Jeavons shares their excitement and believes that we’ll see that feeling of reconnection feeding through into other levels of the game.

“There aren’t too many things that have the power to change moods, to create moments where people come together, not just as individuals but as cities and countries. When we did the deals with the FAs [of England, Scotland and Wales], we recognised that we’re incredibly lucky to have those partnerships and those properties,” he says.

Meanwhile, the fight against online hate continues. Whether football’s decision in April to boycott social actually achieved anything in terms of forcing social media companies’ hands remains a moot point, but Jeavons and BT are determined to play their part in combating the problem.

“It’s really actually quite depressing to see how people behave,” says Jeavons. “I hope that there’s a role for us as a brand to teach people that it’s not OK. You sort of know it’s going on, but you hope it isn’t. It’s really awful on every level. And it’s really not OK.” 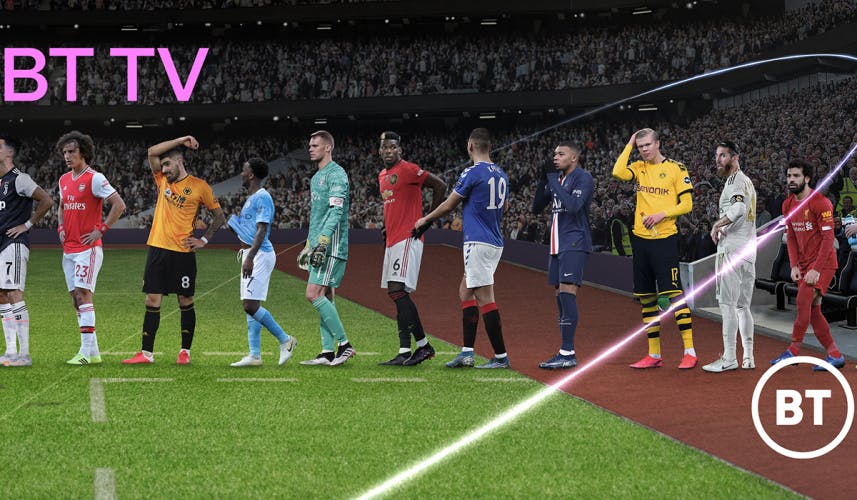