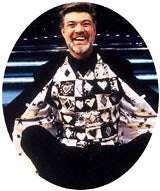 For 12 weeks from this Saturday (September 23), BT will sponsor Cilla’s Moment of Truth and Stars in Their Eyes. For the final six weeks of the sponsorship, Barrymore will replace Moment of Truth.

The BT programme bumpers will feature a Teletext page link. The move follows an ITC code change, which comes into force in October, allowing sponsors to offer more information to viewers.

The deal was negotiated by TAP and created by Drum PHD for BT. Abbott Mead Vickers.BBDO is producing the sponsorship credits and break bumpers. The creative execution will mimic the ‘complete a challenge’ format of Moment of Truth by using the B and T characters to reveal the identities of various rock stars featured in Stars In Their Eyes.