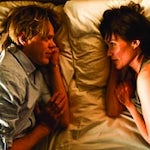 The ad, created by AMV.BBDO, came about after 1.6 million votes were cast after the last ad aired to decide the outcome of the cliff-hanger with 70% voting for Jane to be pregnant.

It will be shown on ITV at 7.30pm tomorrow (18 August) and opens with Jane stunning Adam into silence as she reveals their baby news. It will be premiered to thousands of Facebook fans ahead of its national ’premiere’.

David James, BT retail marketing director, consumer, says: “This was a completely new approach for BT and a first on this scale in the UK. We have been blown away by the massive response which reflects the interest people take in the BT family storyline.”