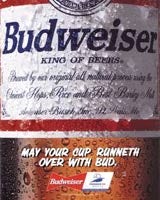 US brewer Budweiser and the UK’s Coors Brewers are understood to be battling it out to replace troubled cable company NTL as shirt sponsor for Glasgow football clubs Rangers and Celtic.

A sponsorship expert at a rival brewers says: “We’ve heard it’s between a new entrant to the market and the King of Beers.” Carling is just being launched in Scotland, while Budweiser uses the trademark “King of Beers”.

NTL signed a four-year deal in 1999, worth £1.25m a year to each team. But NTL said earlier this year that it would not renew the sponsorship (MW September 26). Celtic’s and Rangers’ search for a replacement has been hampered by the collapse of ITV Digital, because it was unclear what television exposure potential sponsors could expect.

The two clubs need a new sponsor quickly to get next season’s kit into shops in time for Christmas. In August, Rangers commercial director Martin Bain, and Celtic branding director David McNally appointed sports management company IMG to help them in their search.

Traditionally, the two teams cannot sign up different companies because of the sectarian split between their supporters. Celtic is traditionally Catholic, while Rangers is traditionally Protestant. Any brand which sponsors one team will lose sales in the rival community in Glasgow and Northern Ireland.