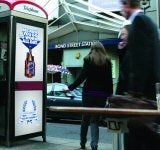 Anheuser-Busch is launching the first above-the-line campaign for its Bud Silver brand next week. It aims to build awareness of the standard lager brand, which was launched last June.

The ads, created by Rainey Kelly Campbell Roalfe/Y&R, use the strapline “You Bet I Earned It!” and focus on the idea that men believe a little bit of effort deserves a massive reward. The campaign breaks on January 22 and includes national radio, outdoor and supermarket sites and more than 6,500 BT phone boxes.

Bud Silver, which is only available in the UK, is a “European style” lager and marks AB’s first venture into the standard lager market. It is brewed using only malt, water, yeast and high-quality Bavarian hops, which AB claims gives it a premium flavour with a low ABV (alcohol by volume) of 4.1%.

The brand has gained distribution in all major UK supermarkets and major on-trade accounts including the Walkabout chain.

Vicki Kipling, newly appointed group brand controller at Anheuser-Busch Europe, says: “We are de-lighted with the level of national distribution Bud Silver has secured to date; now it’s time to shout about the brand to consumers.”

The phone box ads will be the first to use JC Decaux’s new StreetTalk product, which allows marketers to select individual sites based on geodemographics and footfall. Media buying is by Busch Media Europe, Anheuser-Busch’s in-house buying team.

The brewer is reshuffling its marketing division and is merging trade marketing and brand marketing teams. As a result of the changes Oliver West, formerly consumer marketing controller, has left the company.

Singer Christina Aguilera is launching into the celebrity fragrance market after signing a licensing deal with personal care company Procter & Gamble (P&G). It is due to be launched towards the end of this year. The deal is part of an aggressive growth strategy for P&G’s Prestige Products division. It is understood to be its […]

“Always believe in yourself, through good and bad times; believe me youll have both.”

Virgin Digital UK has revamped its music download service with the launch of a new online store. It has also closed its US-based site after signing a deal with online download service, Napster. The deal will give Napster exclusive rights to market its services directly to Virgin Digital’s existing subscriber base. The UK site will […]