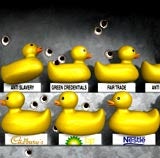 The barracking of BP chairman Peter Sutherland at the petrol giant’s annual general meeting last week reignited the issue of how far brands should go when positioning themselves as environmentally and ethically sound.

The sight of protesting shareholders berating BP for its business ethics in relation to the environment and links with oppressive governments, contrasts sharply with the image it has portrayed through its “Beyond Petroleum” ad campaign. The $100m (£69.5m) push through Ogilvy &amp; Mather aimed at promoting BP as environmentally friendly has, in the eyes of many observers, backfired.

BP’s discomfiture came just days after UK confectionery manufacturers were urged by Foreign Office minister Brian Wilson to ensure that their supplies of cocoa sourced from West Africa were not “infected” by the exploitation of slave labour on farms.

That the constituents of chocolate Easter Eggs may have been produced by child slaves stands in stark contrast to the “made for sharing” ethos of Nestlé’s Quality Street and the family appeal of confectioners such as Cadbury and Mars.

But, while BP explicitly set out to portray itself as environmentally and ethically friendly in the Beyond Petroleum campaign – and was accused of hypocrisy – the chocolate manufacturers have not been noted for their attempts to portray themselves as “socially responsible”. Yet they too have suffered from negative headlines.

If a brand attempts to trumpet its social responsibility, it makes itself a sitting target for pressure groups that want to highlight its hypocrisy. But when brands close their eyes and hope accusations of irresponsible behaviour will vanish, they are equally susceptible to criticism.

People continue to use BP’s petrol, and chocolate is as popular as ever. But there is a worry that a negative image can spin out of control and lead to a boycott. This was certainly the case for Shell and its involvement in Nigeria, and the issue of the disposal of the Brent Spar oil storage platform, which made international headlines in 1995. It is also true of Nike and Gap, which sustained a media whipping when news broke that their products were made using child labour. Such revelations can seriously undermine a brand’s image.

It is a complex, frightening issue for big corporations. They may be experts at product development, marketing and distribution, but when it comes to social and ethical issues, they are too easily portrayed as callous, greedy ogres overlooking human rights and Mother Earth in their insatiable quest for profits.

The issue of slavery in cocoa production was brought to light last week with the case of the ship Etireno, which aid agencies suspected was carrying children bound to work as slaves on farms producing cocoa and rice.

A Channel 4 documentary last autumn claimed that up to 90 per cent of cocoa from The Ivory Coast – supplier of 40 per cent of the world’s production – was produced using slave labour.

After the programme, the confectionery manufacturers’ trade body – the Biscuit, Cake, Chocolate &amp; Confectionery Alliance – commissioned a report from the Natural Resources Institute. It concluded that while there were circumstances in which slavery could exist, there was “no evidence” to support the assertion that 90 per cent of Ivory Coast farms use slave labour.

In the light of the Etireno’s voyage, Wilson said UK confectioners should be “scrupulous in their choice of suppliers and in ensuring that internationally acceptable standards apply”.

There is little evidence that they have been particularly scrupulous – it has transpired that the Natural Resources researchers did not even visit West Africa when compiling their report. The findings were based on previous experience of the region and reports by other bodies such as Unicef.

The UK’s leading confectioners, Nestlé, Mars and Cadbury, admit it is possible child slave labour is used in the cultivation of cocoa used in their products. They risk serious damage to the reputations of their brands if they fail to address these accusations – and to offer credible solutions.

Many companies are now adopting ethical codes and signing up to fair trade marks, to head off accusations that they are callous exploiters. Cadbury Schweppes has established its own Human Rights and Ethical Trading Policy which vows to: “preclude the use of forced labour, respect the rights of employees to join legally recognised labour unions, ensure that children are employed only under circumstances that protect them from physical risks and do not disrupt their education, nor tolerate any form of harassment in the workplace.” The code was adopted last year and is gradually being introduced across the company.

In 1998 overseas development minister Clare Short set up the Ethical Trade Initiative (ETI), which brings together big corporations, charities and trades unions in an attempt to implement codes of labour practice. It is, in effect, a way for corporations to work with charities to find the best ways of removing exploitation from the global supply chain.

The ETI was established after a BBC2 documentary in 1998 accused retailers such as Tesco of exploiting cultivators in developing countries. This followed a three-year campaign by Christian Aid, during which members sent till receipts to supermarkets to demonstrate their spending power and demand action on what they argued was the exploitation of workers in developing countries.

The ETI has signed up 20 corporate members, including all of the major supermarkets and Premier Brands. But not one of the UK’s major confectionery manufacturers has signed up.

Not that membership of the ETI means that companies have magically addressed labour exploitation within their supply chains. But it does indicate that they are trying to resolve the problem in the long term and are working with non-governmental organisations to make gradual improvements. These include encouraging existing suppliers to improve labour conditions, rather than dropping those suppliers with poor practices, as this could leave workers at a severe economic disadvantage.

So why the reticence of the confectionery manufacturers to sign up to the Government-backed scheme?

Nestlé has been barred from joining, after charities said they would not trust the company to abide by the ETI’s codes of practice, and that they deplored Nestlé’s stance on a range of issues such as marketing of powdered baby milk and fair trade.

Nestlé says it has never applied for membership of the ETI, though a spokeswoman adds: “We have been active to seek solutions to the [slavery] problem. We have attempted to exert pressure through our trade association (the BCCCA). “Cadbury says it has no need to sign up to the ETI because “it’s more important for us to develop systems internally”.

Other companies have rejected signing up to the ETI because they claim it is “too expensive”. While the Government matches any funds raised – some £200,000 a year – it costs a large corporation £25,000 a year to join – small change for a multinational.

Home improvement and DIY retailer B&Q’s head of sustainability, Alan Knight, says: “ETI is very important for retailers that are not quite sure what to do. We would love to be a member, but that would be £25,000 less to spend on doing it.”

He says B&Q pursues a policy of “continuous improvement” in its supplier factories in developing countries. He says good work on ensuring that suppliers treat their staff well should not be used as a marketing gimmick.

“We have to make sure not to make our initiatives sound like marketing initiatives. I would not want to trivialise the importance of our work.”

But Sharon McClenaghan, policy officer for the private sector at development organisation Christian Aid and a representative for the ETI, says companies that are members of the organisation get access to the skills and knowledge of local cultures and situations built up by non-governmental organisations over many years, which they would otherwise lack.

“They get a lot for their moneyÃÂ­” she says. “A lot of the people in these companies don’t know the language or the issues. They might get back good results but without a proper monitoring process.”

She argues that global corporations should sign up to the ETI, while admitting she is disappointed that only a handful of member companies have so far published reports on how they are implementing the codes of fair practice on labour rights.

While B&Q uses the Rug Mark stamp, which ensures rugs have not been produced by child labour, Knight disagrees with signing up to codes and fair trade marks . He says it is fine to adopt such a scheme for a single product and single issue, but it is inadvisable for a business to declare itself “ethical” in general terms as this can be easily undermined, and make the company look hypocritical.

But it has transpired that B&Q does not recognise union membership, so the retailer would not be technically eligible to join the ETI, as the ETI’s code of practice on labour states that “workers, without distinction, have the right to join or form trade unions of their own choosing and to bargain collectively”.

The ETI says it is about to launch a recruitment drive to double its membership, and will also take new steps to ensure it can eject corporations that are not entering into the spirit of the organisation.

The reluctance to join on the part of many corporations is evidence that there is still much confusion and fear among brand owners about how they approach issues of ethics and the environment.

Some brands have decided that issues such as exploitation of workers along the supply chain or attempts to limit environmental damage are best dealt with quietly.

But companies that ignore the issues are sitting on a powder keg primed to explode when the next exploitation outrage hits the media.