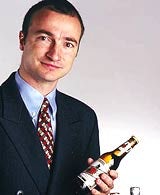 Bulmer has appointed Andrew Carter to the newly-created role of marketing controller for the company’s beer division.

Carter, who was previously marketing director for Bulmer in Australia, will be responsible for developing the company’s beer business, which already includes a number of premium international brands such as San Miguel, Red Stripe, Amstel and DAB.

Carter will report to UK marketing director Jon Eggleton. The company recently split into two divisions, beer and cider, as part of its strategy to establish itself as a long drinks company. It is expected to make more additions to its beer portfolio.

Carter was responsible for overseeing the relaunch of Strongbow and the launch of Caffrey’s in Australia following Bulmer’s appointment as distributor for the brand.

Bulmer, which is best known for its Strongbow, Woodpecker and Scrumpy Jack brands, changed its name from HP Bulmer and revamped its logo in 1999 to emphasise the diversity of its portfolio.

Earlier this month the drinks company announced it had formed an alliance with foodservice group Brake Bros and King UK, a non-food supplier to the licensed trade, to develop the online business.