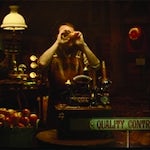 The campaign, created by St Lukes, aims to show a “behind the scenes” look at the Bulmers cider mill in Hereford.

The ads feature characters that work at the mill and claim to have responsibility for “releasing the British summer”.

The three ads titled Quality Control, Sun and Frisbee Rig, play on elements of summer associated with cider drinking such as sunshine and games of Frisbee.

It follows the “Bulmers HQ” TV ads which aired in July and an outdoor camapaign for its limited edition SummerBlend variant in June.

The campaign was the first advertising for the Heineken-owned premium bottled cider brand since it appointed St Lukes in March.

Rival cider brand Gaymer was bought by C&C Group in a £45m deal earlier this summer.