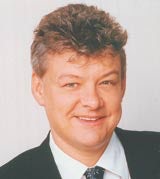 Bulmers group marketing director Jon Eggleton is understood to be leaving the company, following Scottish &amp; Newcastle’s acquisition of the cider maker in April. It is believed that Eggleton is not interested in relocating to Scotland, where the S&N-owned Scottish Courage marketing team is based.

“Eggleton has been overseeing the integration of Bulmers into the S&N business, and S&N would like to retain his specialist skills in the business and tap into his commercial background,” the insider adds.

Eggleton is a former accountant, who began his marketing career at Sterling Health. He then spent eight years with Guinness Great Britain, becoming marketing controller, before moving to Singapore as director of marketing Asia Pacific.

He joined Bulmers in 1999 as the UK marketing director (MW September 9, 1999). In May, Eggleton was given the new role of international director. He recently appointed Leo Burnett to handle Bulmers’ &£8m ad account (MW June 12).

However, Eggleton denies that he is leaving the company. “I am not expecting a role or an opportunity within Scottish Courage, but I’m still in negotiations with S&N. Clearly Edinburgh is a long way to go, but in case of an appropriate job, relocation is not a problem,” he says.