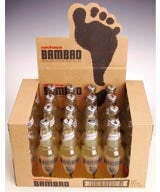 The news is a disaster for Bulmers’ new product development (npd) programme. Earlier this year, the company axed cider drink Strongbow Spice after less than a year on the shelves.

A Bulmers spokesman says: “Bambao is still on sale, but it has not been as big a success as we would have liked. Its future is under review.”

The news comes after a profit warning from Bulmers this week, due to a number of one-off factors. These include a £2m shortfall in expected sales caused by “the disappointing performance of new products in the UK and internationally”; £4.1m in stock markdowns; and increased pension costs of £2m. The company is also writing off exceptional costs of £4.7m, relating to npd investment.

The Bulmers spokesman dismisses as speculation reports that former Whitbread Beer managing director Miles Templeman has been appointed as group chief executive. In September, chief executive Mike Hughes and finance director Alan Flockhart resigned after the revelation of a £3.3m hole in Bulmers’ accounts, related to “previously unidentified promotional costs”. The company has appointed “company doctor” John Darlington as an advisor to the board.

Bulmers’ share price crashed again this week. It stood at 119p as Marketing Week went to press, compared with more than 440p a year ago.