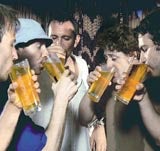 Bulmers is planning a massive push for its Strongbow brand this year, with a 68 per cent increase in the brand’s advertising budget, taking the spend to £8m.

The blitz is an attempt to further bolster Strongbow’s leading position in the cider market.

The move follows close on the heels of the appointment of Miles Templeman, the former head of Whitbread’s brewing arm, as its new chief executive.

Last year, Strongbow held 33.7 per cent of the UK cider brand market in both the on-trade and off-trade sectors.

A spokesman for Bulmers says: “The increased ad spend on Strongbow reflects our commitment to the brand. The objective is to bring in new drinkers aged between 18 and 24 years old.”

TBWA/London handles advertising for the brand. The new campaign will include television, radio and press advertising.

HP Bulmer, the parent company, came under fire last year after it unearthed a £3.8m hole in its accounts. As a result it ousted its chief executive and finance director.

It has been reported that early this year the group hoisted the “for sale” sign and it is understood to be in talks with, among others, private equity group CVC Capital Partners.

Templeman has worked for CVC and in 2001 teamed up with the private equity firm to lead an abortive bid for Britvic Soft Drinks.