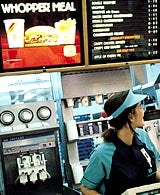 The division has been scrapped as Dasburg builds a more “functional”, rather than geographical, management structure.

The restructure will result in more centralised marketing operations, which could lead to ads being brought to the UK from the US.

A spokesman for Burger King in the US says: “It is too early to say what will happen to [Burger King’s] ad agencies.

“But Clouser will be looking at the global marketing structure and it is likely marketing directors in other countries will have more contact with the US than before.”

He was also senior vice-president of advertising at Northwest Airlines when Dasburg was chief executive of the airline.