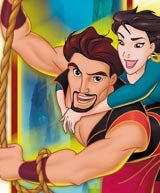 Dreamworks SKG has teamed up with Burger King to launch a range of collectible toys to mark the release of its animated feature film Sinbad: Legend Of The Seven Seas on July 25.

The deal with Burger King is a global partnership. In the UK there will be collectible figures offered with each Burger King Kids Meal. The figures will include Sinbad, his friend Proteus, Marina and Eris, the Goddess of Chaos.

Dreamwork SKG’s other partners include Aykroyd, which will offer branded nightwear; and TDP, which has designed leisureand underwear. Penguin will publish books that tie in with the movie and GB Posters will create posters. A computer game, devised by Infogrammes, will also be available.

The voice cast for Sinbad includes Brad Pitt, Catherine Zeta Jones-Douglas, Michelle Pfeiffer and Joseph Fiennes. The film tells the story of how Sindbad is framed for stealing a priceless treasure and his friend, who is sentenced to die unless the precious item is returned.

Dreamworks SKG was set up in 1994 by Steven Spielberg, Jeffrey Katzenberg and David Geffen.