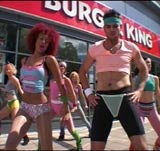 Viewers can choose whether they see a depressed busker giving a lacklustre performance of the BK “Only &£1.99” theme (sung to the tune of Cuban folk song Guantanemera), or a full, high-energy version complete with sweatpant- and leotard-clad female backing singers.

If viewers decide to drop 1p in the busker’s cup, they get the downbeat version; if they give him &£1.99, they get the full version, which is a deliberate spoof of Eric Prydz’s hit video from last year, “Call On Me”, and even features some of the same backing dancers.

Burger King has begun to use viral marketing as a major part of its marketing platform. In the US, executions have included the Subservient Chicken website (in which a man dressed in a chicken suit can be ordered around by online visitors) and, more recently, Coq Roq, featuring a Spinal Tap-style rock band that performs a song about Burger King’s chicken-based products dressed in chicken outfits.

US heavy metal band Slipknot, which performs in masks, has now threatened BK and CP&amp;B with a lawsuit over the Coq Roq ads, claiming that its trademarked image and persona have been hijacked “in order to influence the Slipknot generation to purchase Chicken Fries”.

Slipknot’s lawyers say the Coq Roq masks are blatant copies of some of the masks worn by the band, including one with dreadlocks. BK’s lawyers have pointed out that many rock groups wear masks.

It is unclear whether the threatened legal action is a promotional stunt by Slipknot, or even by CP&amp;B and Burger King.

Hewlett-Packard vice-president of marketing for Europe, the Middle East and Africa Amanda MacKenzie has stepped down after a year in the role. It is understood she has a senior marketing role lined up, but it is not known where.

Congratulations to Grant Duncan (MW August 11). He tells us ad agencies have to change their 1950s ways, adapt to multi-channel strategies and, what is more, that his agency has succeeded in this. With an open plan office to boot. This all appears very laudable, as does the “media neutral” stance adopted by many below-the-line […]