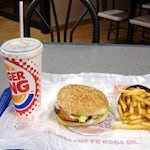 Burger King confirmed he was leaving but did not say what his plans were. On Kisilevsky’s Twitter feed, however, he has posted “I’ve got a new job. Yay!!!!”

Kisilevsky had held the role of vice president of marketing for EMEA since 2008 having joined Burger King from Leo Burnett in 2006. His departure comes weeks after Natalia Franco was named as Burger King’s chief marketing officer, based in the company’s Miami headquarters .

Kisilevsky reported not to the chief marketing officer, but to Kevin Higgins, who is president of Burger King’s EMEA operations.