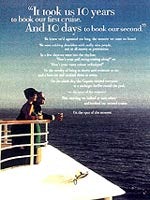 P&O Cruises is looking for a new agency to handle its &£7m advertising business after working with Leo Burnett for only eight months.

Leo Burnett has been forced to resign the business because of a conflict of interest with its Walt Disney business. Disney also offers holiday cruises.

The two will part company at the end of March and P&O is already lining up agencies to pitch for the business. P&O says it is not talking to any agencies from the previous pitch, which included HHCL &amp; Partners, McCann-Erickson and the previous incumbent Lowe Lintas.

Carol Marlow, sales and marketing director of P&O Cruises, says: “We are obviously disappointed that we will be parting company, but believe this to be the best solution. Our current campaign is working well, and we are already in discussions with our chosen potential replacement agencies.”

Stephen Whyte, managing director of Leo Burnett adds: “We will be very sorry to lose P&O Cruises as we have developed a strong and productive relationship over the past eight months.”

Media, which is handled by Starcom Motive Partnership, is not affected even though the agency also handles Disney.

Cereal giant Kellogg has joined forces with yogurt brand Müller to launch a new dairy product in the Corners range.

German and non-German companies alike are preparing to exploit the approaching relaxation of promotions and incentives rules. The race for German consumers’ loyalty is on