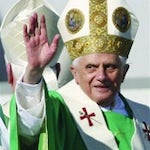 It will run on busses in key areas that the Pope is set to visit during his trip to London in September, including Westminster Hall, where the Pope will deliver a speech to Britain’s Civic Society on 17 September.

The outdoor campaign will run for a month.

The group is also planning protests including a vigil outside Westminster Cathedral on the eve of the Pope’s visit (15 September).

Last week, Marketing Week revealed that sales of official merchandise for the Pope’s visit to Britain could struggle because of the economic downturn and unofficial products.

An official online store for Pope Benedict XVI’s four-day visit to the UK offers merchandise that bears the image of the Papal keys and the phrase “Heart Speaks Unto Heart”, including mugs (£8), baseball caps (£15) and rosaries (up to £30).