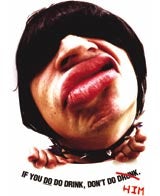 It’s good to see those that have fallen on hard times making something of themselves. That’s what’s happened to unemployed actors Derek D’Runkard, Bryan Boozi and Daphne – who is “too cool” to have a surname, following the example of Jordan, Prince and Cheggers – as the trio have been nominated for a prestigious IPR award.