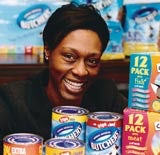 Butcher’s has promoted brand manager Yetunde Ige to the newly created position of head of marketing, to oversee all the petfood company’s brands.

Ige previously handled the marketing of Butcher’s dog food brands and oversaw the appointment of Clemmow Hornby Inge to the account last year (MW January 3, 2002). Ige, who has been at the petfood company for 18 months, joined from Coca-Cola where she was brand manager.

A spokeswoman says the role of head of marketing was created to bring the two brands and their budgets closer together. However, she says there are no plans to consolidate the advertising into one agency.

Ige says: “Butcher’s is a well-established, national brand, while Classic is a relative new-comer, so they both face different challenges.”

She adds that in the coming months the company will be rolling out new products designed to “reflect the changing needs of pet owners”.