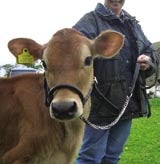 Hollywood folklore contains many tales of stars who make bizarre demands when making a film or putting in a personal appearance. Most of them seem to involve Mariah Carey. But one particular star, who was due to attend the grand opening of a bar in Carlisle, takes the biscuit.

The diva’s representatives have insisted that paving stones outside the venue be levelled, in order “to prevent tripping”; that traffic be temporarily suspended “to prevent her being startled”; and that no one – but no one – be allowed to stand within 25 feet of her.

The opening of the Litten Tree in Carlisle later this month is sponsored by Brown Cow Vodka Shake, and the company had arranged for its promotional face – a comely Jersey cow named Constance – to appear.

However, since the agreement was made, Constance has been spotted by Hollywood scouts and signed up to appear in a film (believed to be a bovine version of Babe). As a consequence, she has been insured for $7.5m (£4.1m).

Brown Cow spokesman Iain Macauley says: “These are very unusual terms, some of which are clearly impossible to address. But we’re negotiating, and we’re confident there is a way though this. We want to honour the agreement made before Constance was famous.”

It’s the same, tired old story of a star letting fame go to her head. The Diary will keep you updated with news of Constance’s silicon udder implants and impending admission to a rehab clinic to cure her cud addiction.