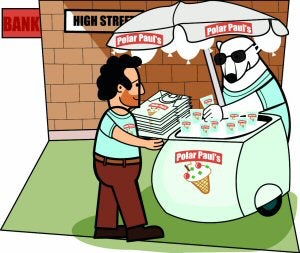 The on-pack promotion is unlikely to disappear from retailers’ shelves any time soon. But what may be close to extinction is the unsupported promotion, especially given the expanding range of imaginative options for engaging with consumers.

The idea of “support” for a promotion now goes well beyond a simple “buy me!” message. It is also to do with ensuring staff and third-party co-operation, with measuring success, and with building long-term affinity with a brand as well as short-term sales.

Starting with the on-pack message and working outwards, even the reliability of any accompanying point-of-sale (POS) material is far from being a given. Point-of-Purchase Advertising International (POPAI) estimates that full compliance in displaying POS material only takes place in 60% of cases. According to Guy Vaughan at POPAI, this low figure may reflect in-store priorities as well as pressure on staffing levels.

Rewarding Compliance
Brands are starting to tackle this problem head-on by directly rewarding retail staff compliance. According to Tricia Weener, managing director of integrated marketing and communications agency Intelligent Marketing, this means starting out with material that is appropriate to, and usable in, a specific store environment. “Communications may be via the manager, but incentives go directly to the staff who put the material up,” she explains. “We also use mystery shoppers who will hand over rewards in compliant stores.”

The technique was used in an on-pack promotion for Kinder in summer 2005, says Weener. A similar strategy was adopted in a Europe-wide brand awareness campaign for golf equipment specialist TaylorMade on the occasion of its 25th anniversary. “It was vital to get staff behind it to put POS material up in stores, and there was a sales-related points system with prizes,” she says.

But all this attention to staff is purely to allow more effective communication with the consumer. And that communication is likely to be about much more than engineering a temporary bump in the sales curve.

In its most recent “Get Good” promotion for Robinsons Fruit Shoot, Euro RSCG KLP targeted parents, particularly via the “mum’s press”.

In the promotional campaign, KLP used the internet as well as POS and press advertising to carry home its message. This is aimed at eight-to-ten year-olds, says director John Geers.”At that age, kids want to play, and they want to learn, so they can show off to their parents and their peers,” he explains.

Running throughout the summer, the promotion offered children the opportunity to “get good” at activities from tennis to dancing, with coaching from celebrities and experts. This year, an experiential strand was added to the campaign, with sponsored training sessions at Scout Association events.

Geers says: “It’s all very well to say ‘get good’, but this is a way of showing you mean it. It’s the proof.”

But where is the “proof” that voguish experiential campaigns have an impact on anyone other than brand managers? Geers himself admits: “It is something of an act of faith on the part of the client.” He adds: “The benefits are not as tangible as they are with, say, on-pack promotions where sales can be monitored.”

Despite this credibility barrier, the champions of experiential marketing are growing in number and, it appears, influence. Ian Millner is chief executive of integrated agency Iris and director of Iris Experience. He says: “We find that experiential is extremely effective when you’re working to influence both retail and consumer agendas simultaneously.”

Adding to the Mix
Millner adds: “Brands have got very few variables with which to influence retailers, and it can be a massive challenge to win greater share-of-voice. But if you put experiential into the mix, you can increase a brand’s authority.”

Earlier this year, Iris worked on a project with Wonderbra, staging catwalk style events nationally in partnership with Debenhams and Glamour magazine. Pop bands and soap celebrities were recruited to take part, using word-of-mouth, online pre-promotion, POS material in Debenhams and lashings of PR (rather than advertising) to generate interest.

This type of partnership can prove very valuable from a retailer’s perspective, too, and need not involve in-store brands. Intelligent Marketing worked on an Easter campaign for Woolworths this year, partnering it with the Tussauds Group, and generating strong results for both participants.

The twinning of the retail brand with the attractions brand was based on research that showed they shared a very similar consumer profile, says Weener. Anyone spending over £10 in store won Tussauds vouchers worth over £200 in discounts.

“At each attraction, we had vouchers to take the consumer back to Woolworths,” Weener explains. “There were also experiential • and digital aspects, with an online competition to guess the value of goods inside a Peugeot 1007.”

Experiential and the internet can both build on a campaign in a way that a straightforward sales promotion cannot, says Geers at KLP. “For one thing, you can’t run an on-pack promotion all year-round. With Robinsons, the online presence provides evidence that the brand is always there with something to help kids.”

In some cases, of course, a sales promotion can lead with an online campaign. David Atkinson, managing partner at Space, explains that the agency worked on just such a promotion for Eurostar earlier this year. It tied in with the screen launch of the Da Vinci Code, and was supported by TV ads and experiential, he says.

Don’t Rely on Packaging
But even for packaged consumer goods, there may be perfectly good reasons for not relying on the on-pack message. In the case of Nivea, says Atkinson, this is because the product itself never carries promotions. The multilingual packs filled in Germany cannot easily be tailored for individual national campaigns, he explains.

But the brand is far from shy about promoting itself through other means. A year ago, Nivea’s Face Academy promotion targeted the 14- to18-year-old age group. Atkinson explains: “It encouraged girls to begin a skincare regime earlier than they might otherwise have done. It started with a brand experience, including trials and consultation, and then drove consumers online to compete for places at the Face Academy.” This offered far more than just makeup and skincare advice, he says.

No two agencies are likely to agree on the most effective promotional mix for a particular brand, audience or challenge. Atkinson, for instance, argues that TV support for on-pack promotions is growing in importance. As he puts it: “If it’s worth doing, it’s worth creating TV advertising.”

Geers appears more aware of the limitations than the strengths of the small screen. “TV may reach millions, but it doesn’t give the consumer anything in terms of a hands-on experience,” he says.

For Millner, the fact that the Wonderbra campaign relied on no above-the-line advertising at all is a matter of pride. But his analysis of what mix of disciplines works best is far from simplistic. “If you’re number two in a given category, or below, there’s no point trying to use the same mix as your main competitors,” he advises. “You need to use more engaging techniques. Otherwise, you could lose out in a spending shoot-out.”

Nor is there any shortage of “engaging techniques” for brands to throw into the mix. On the evidence of a recent Iris promotion for Sony Ericsson, we could be seeing more widespread use of mobile phones in experiential as well as direct marketing.

During the last Ibiza Rocks summer festival, the company promoted its Walkman range of phones by putting them literally centre-stage. DJs amplified tracks directly from the phone, and gig-goers approaching the famed Manumission club were able to receive bluetooth content courtesy of Sony Ericsson.

Millner describes experiential techniques as being “under-utilised”. “You’ll start to see experiential being used by brands more often,” he predicts. And for some of those brands, using experiential-type activities to drive trial may make a major difference to short-term sales, as well as to a brand’s longer-term standing.

Convert Through Trial
Weener describes a campaign earlier this year for golf brand TaylorMade which was based on the client’s own estimate that, once a golfer trialled the brand’s clubs, the conversion rate was 85%. The project built on similar strategies over previous summers, and took the form of a roadshow, touring golfing locations around Europe.

This year, golfers were not only invited to test the equipment, but had clubs fitted to their height, build and swing. According to Weener, the client saw a £750,000 sales increase over and above what earlier campaigns had achieved.

But in many cases, a campaign involving experiential, PR and online marketing is likely to be more of a slow-burner.

No one is asking what Wonderbra thinks of “flatter curves”, but according to Iris, the brand-owner is now a big fan of experiential.

Oiling the cogs of integrationwhich tends to mean meetings, with my agency colleagues or conference calls with clients none of my clients are based in London so Ive become very adept at building relationships over the phone.

When news of NTL’s bid for ITV broke, the media was quick to call it a match made in hell, but some are now starting to change their minds.

Mobile network 3 is to launch a new mobile internet package, backed by a string of high-profile Web companies. Called X-Series, the package will allow customers to make unlimited calls from their mobile using Web telephony provider Skype and watch their home television on their mobile phone in a tie-up with Sling Media. They will […]