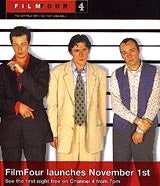 Channel 4’s appointment of a corporate banker to head its newly created 4Ventures arm comes just weeks after the station was attacked for being a “runaway train”, throwing cash around to develop digital and Internet channels and wasting millions of pounds on excessive wages and swollen staff numbers.

The attack, made by former Channel 5 boss David Elstein, has been dismissed by Channel 4 as that of a lone voice of dissent. But one source close to Channel 4 believes that the prime task of former UBS Warburg corporate financier Rob Woodward, who joins 4Ventures in August as managing director, will be to bring more financial constraints to the developing businesses.

“Woodward has been brought in to get 4Ventures on a sounder financial footing. There has been an awful lot of money flowing around at Channel 4, and it has been rather unaccountable – E4’s &£10m annual marketing spend is more than C5’s entire [marketing] budget. Channel 4 has been able to launch extra channels without the financial constraints of other players in this market,” says the source.

Channel 4 is ploughing &£250m into ventures including FilmFour, E4, Go Racing, its Internet sites and its commercial and international businesses, but it could be five years before 4Ventures, the company under which these businesses are grouped, starts to make a profit.

In a peculiar reversal of received market wisdom, it is the UK’s public service media that are forging ahead into the new media future. The BBC and Channel 4 have leapt into the digital and Internet age in a way that many private companies would envy.

The absence of shareholders means they can plan for the future and pour in huge development budgets without having investors breathing down their necks, looking for a quick return. Carlton’s results last week, which showed first-half profits down 32 per cent to &£65.8m, partly due to its investment in ONdigital, illustrate just how hard it is for quoted companies to bear the sustained losses inherent in developing new media businesses. Even BSkyB, famed for its deep pockets, has axed many of its Internet and interactive experiments.

4Ventures was set up as a way to distance the main channel from these commercial experiments, and also to allow for outside investment to be brought in, or even for the division to be floated on the Stock Exchange.

Woodward is, at present, on gardening leave from his previous job as a managing director in corporate finance at UBS Warburg, and he has refused to respond to questions from the press. A spokeswoman for Warburg says he was one of “several hundred managing directors in corporate finance”. He worked in the Technology Media Telecoms section and the spokeswoman says he was “looking at merger and acquisition deals, advising companies on restructuring and finance and in some cases on going public”.

At 4Ventures he should be able to use this experience to strike partnership deals of the sort Channel 4 has forged with BSkyB over cricket coverage, and also to bring in finance to offset the huge investment needed for development without encroaching on the channel’s main programming budget.

But whether many commercial financiers would be prepared to back 4Ventures for such a long-term payback is questionable. Many already feel they were burnt in the dot-com downturn, and UK investors are not famed for their long-term view.

So could Woodward be looking at cutbacks in what critics say are Channel 4’s swollen staff numbers? Since the company moved into its Horseferry Road headquarters a few years ago, staff numbers are understood to have trebled to 900, and Channel 4 is spreading its tentacles to an adjacent building.

According to Richard Oliver, head of television at McCann-Erickson, “axe-wielding is not the way they do things at C4”, although he agrees that hiring Woodward could be a way of giving 4Ventures “more focus in a business sense”.

But he says there are worries about the future of 4Ventures, with FilmFour just over half way to its break-even target of 800,000 subscribers and questions over E4’s future content. “The big test for E4 is going to be the second half of this year. It launched with a lot of US imports, such as Friends, and they all finish around June. After that there’s nothing in the second half. I think it is going to struggle,” he says.

He adds that E4, like ITV’s digital offerings, “looks good on paper” because it can be cross-promoted from the main channel. But there is only a certain amount of cross-promotion that can be done, and all of it comes at the expense of promoting programmes on the primary channel.

Dan Brooke, deputy managing director of FilmFour and E4, says: “At the moment we are consolidating what we have done rather than launching new channels.” He plays down the prospect of new activity from 4Ventures.

This all comes against a background of the Conservatives’ privatisation pledge for Channel 4. There is also a belief in some quarters that Labour might not be averse to selling off the broadcaster, should the party find it needs the money.

Woodward might float 4Ventures on the Stock Market, though if he does too good a job at making it profitable, it will provide more ammunition for those who want Channel 4 privatised.