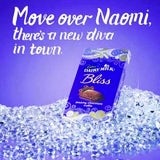 Campbell claims that the ads for Cadbury Bliss, which use the strapline “Move over Naomi, there’s a new diva in town”, refer to her because she is black and are “insulting to all black women and people”.

She says, “I am shocked. It’s upsetting to be described as chocolate, not just for me, but for all black women and black people. I do not find any humour in this. It is insulting and hurtful.”

The confectionery brand has pulled the ads, which launched earlier this month to support the introduction of three new variants of the Dairy Milk Bliss bar.

A spokesperson for Cadbury’s says: “It was certainly never our intention to cause any offence and the campaign itself is a light-hearted take on the social pretensions of Cadbury Dairy Milk Bliss.

“Cadbury takes its responsibility very seriously indeed and we would never produce any marketing activity we felt might cause offence to any section of society.”

Equality group Operation Black Vote has supported Campbell’s claims and is calling on Cadbury to apologise.

Simon Woolley of Operation Black Vote says: “Racism in the playground starts with white children calling black children ’chocolate bar’. At best this is insensitive and, at worst, Cadbury’s utter disregard for a community’s feelings. Their white euro-centric joke is not funny to black people.”